Borough of Manhattan Community College (BMCC/CUNY) is ranked as the safest campus in New York state with just 0.04 violent crimes per 1,000 students, according to The Safest Cities for College Students, a new study released by SafeHome.org.

The study examines colleges with at least 10,000 students in nearly 150 U.S. cities in 43 states. The rankings are based on the most recent data, through 2017, from the U.S. Department of Justice, FBI and U.S. Department of Education.

The only campuses to have beat the .04 rating are East Los Angeles College in California, which earned a .03 ranking, and Broward College in Florida, which came in at .02.

“We’re not just about enforcement.”

Campus safety relates to a wide range of events, from bias-related incidents, to ensuring that students, faculty and staff maintain standards of conduct related to sexual harassment, drug and alcohol policies.

The campus security officers also provide trainings for faculty, students and staff in emergency preparedness, CPR (cardiopulmonary resuscitation), AED (automated external defibrillator) and other areas. They promote efforts of the Stop the Bleeding national campaign, which trains the lay person to stop a victim’s bleeding while EMTs are on the way, and offer workshops in emergency preparedness. 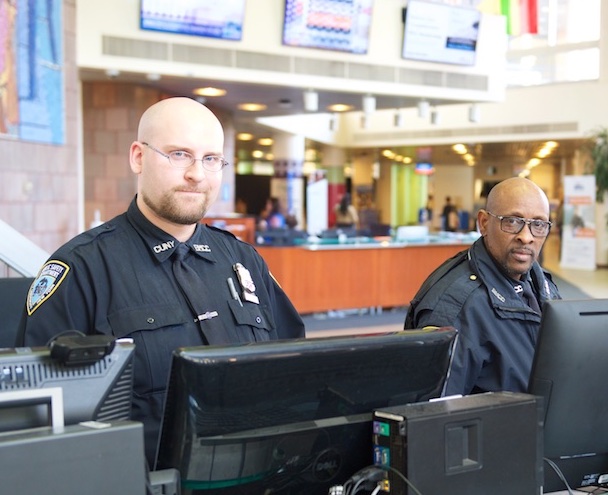 “We’re not just about enforcement,” says Director of Public Safety Michael Korn. “We’re here 24 hours a day, seven days a week, and often we are the only ones on the scene when students are at their most vulnerable, when they need assistance finding emergency housing, or when they’re experiencing a psychological crisis and need to be connected with health professionals or social workers who can assist them.”

In events such as Hurricane Sandy or the terrorist attack of October 31, 2017 — in which a driver plowed a pickup truck down a crowded bike path just across the BMCC Chamber Street campus —  Public Safety Department officers on campus must act quickly to protect the BMCC community.

“It’s about teamwork,” Korn says. “We don’t work in a silo. We’re always working to keep the dialogue open between our department and other departments across campus. BMCC is the site of a lot of large events, and we work hard to ensure that those events go smoothly and safely.”

He adds that Public Safety Department officers, “aren’t just there to check IDs. We’ve branched out and stepped up our trainings. We have a presentation on domestic violence awareness coming up on October 15 for students, faculty and staff, and every year we give workshops or set up tables on campus to help students understand how to protect themselves from identity theft and credit card scams, how to stay safe on the subway, and other areas that relate to them.”

Public safety is part of a larger picture.

The Office of Public Safety provided the 2019 Annual Security Report, which includes crime statistics for 2016, 2017 and 2018, as well as incidents reported to the New York Police Department. Also, public safety officers complete requirements defined by the CUNY Public Safety Training Academy when they come on board.

“We’re part of a bigger picture,” says Korn. “In conjunction with the training academy, we make sure all our officers are familiar with policies and procedures at BMCC on how to handle arrest situations, how to diffuse a situation and connect people with resources — even how to handle a bomb scare or active shooter.”

The public safety team members are evaluated periodically and refresh their training as needed.

“Even something as simple as making a report, has to be done carefully in order to make our campus a safer place,” he says. “Here’s an example. A report of property missing has to include details such as what the person was wearing around the time of the loss, so we can go back into our surveillance system and quickly find that person and observe what might have happened to their property.”

“It’s a team effort,” he reiterates. “We have about 66 line officers and 15 supervisors, and both our internal communication and our outward communication with students, faculty and staff —  as well as our communication with agencies throughout the city — plays a critical role in making a safe environment on campus. We’re constantly evaluating our efforts, retraining ourselves, and improving what we offer to the BMCC community. It all contributes to why we got the high rating for safety, and how we plan to maintain it.”