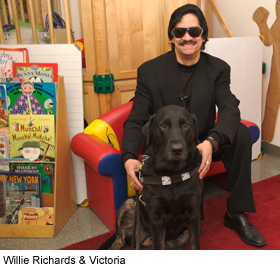 Clem Richardson, columnist for the New York Daily News writes about Willie Richards, who is not your average elementary education major at BMCC. Elementary Education is not a profession men typically pursue. But more so, Willie is a blind early childhood major.

In the Friday, March 30, edition of the Daily News, Clem Richardson, who writes the City Beat and Great People columns for the newspaper, devoted a full-page to Willie Richards under the title, “Degree plus award for singular student.”

According to Clem Richardson, Willie Richards “knows the first thing he’ll do after walking out of the Borough of Manhattan Community College with an associate degree in Early Childhood Education this June.” Willie remarked “I’m going to take a long vacation. It’s been hard. It’s been tough.”

Willie Richards is not your average elementary education teacher.

For one thing, there’s his gender: Elementary education isn’t a profession men typically pursue. But Richards, who will graduate from BMCC this May, has not only trained for that profession, he has already excelled at it. In recognition of his achievements, he has been named one of six recipients of the 2007 Vanguard Award, which is presented to outstanding undergraduate students preparing for careers that are nontraditional for their gender. The statewide award program is coordinated by the Center for Innovation in Career Development at the University of Albany and sponsored by the New York State Education Department.

“I’ve wanted to be a teacher for as long as I can remember,” says Richards. “My teachers were my heroes, and, in turn, I’ve always hoped to provide a role model for children.” But why early childhood education? “Because that’s where I can feel I can make the maximum impact,” he says. “It’s where the need for a positive role model is greatest.” What also sets Richards apart in his chosen profession is the fact that he is blind. In the Daily News, Richards recounts how swiftly he was disabled. “I woke up one day and my eyes were red and swollen. I thought I had pink eye. I went to the doctor, but in six months I was completely blind.”

The columnist, Richardson, goes on to write, “His (Willie’s) plunge into a world of darkness had the same effect on Richards’ spirit—he tumbled into deep depression.” But with strong encouragement and support from his family, the Lighthouse for the Blind, and a friend who referred Willie to BMCC’s Office of Services for Disabilities, Willie took a great leap forward.

BMCC early childhood instructor Takiema Bunche-Smith, who nominated Richards for the award, says his disability has proven more an asset than a drawback. “The children who interact with him see firsthand that we live in a very diverse world,” she says. “It’s one thing to talk about diversity or read about it in books, but another thing to experience it every day from an early age. Having Willie as a teacher becomes an invaluable part of the children’s education.”

It helps that Richards is totally open about his disability and encourages children’s questions. “Kids at that age have no prejudice—and no discomfort—when it comes to people with disabilities,” he says. “How do you match your clothes when you get dressed in the morning?” one second-grader asked recently. Richards explained his system and why it was important to him. “I like to be a snazzy dresser,” he said.

When Richards steps forward to receive the Vanguard Award this month, and later, when he receives his BMCC diploma, he will be accompanied by his guide dog, an endearing black lab named Victoria. “She’s been with me every step of the way—a true partner,” he says. “If not for Victoria, I would never have been able to go to college.”

Victoria isn’t Richards’ only source of support. “Many, many people, including Takiema Bunche-Smith, the staff of the BMCC Department of Disability, and others, have provided an incredible amount of guidance, help and encouragement,” he says. “Frankly, I was surprised to be nominated for the Vanguard Award. I guess Takiema sees something in me that I may not see in myself.” Bunche-Smith smiles at his self-effacement.

“We chose Willie for this award because he is a wonderful student and a great teacher,” she says. “He’s exactly the kind of person we want to represent our profession.”