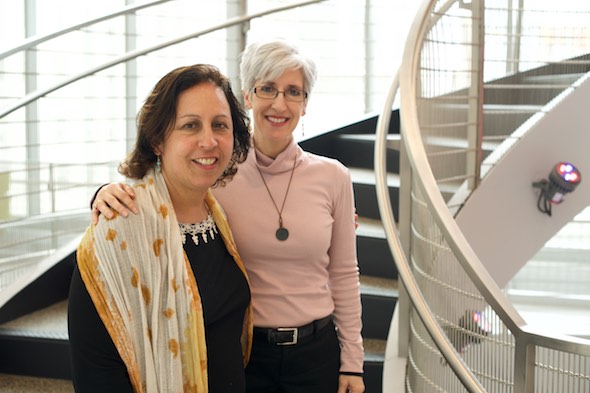 Two BMCC English professors, Cheryl J. Fish and Jami Carlacio, will be spending part of their summer as scholars in residence through the Faculty Resource Network (FRN) at New York University.

Professor Fish has been awarded the prestigious Summer 2015 Calvin B. Grimes Scholar-in-Residence to further develop her research project, “A Town on Hold: Mining/ Removal of Kiruna, Sweden, and Sami Response in Film.”

Professor Carlacio will be among a group of faculty from across the United States participating as a Summer Scholar in Residence through FRN, and will focus on her research project, “‘Ain’t I a Woman(ist)?’ The Spiritual Epistemology of Sojourner Truth.”

Each professor will be interacting in a community of professors and researchers that is national in scope.

“I think it makes sense for us to look beyond BMCC as we develop our scholarly work,” says Carlacio. “People at NYU or Columbia or any of the CUNY schools are doing amazing work and I think it’s important that we recognize each other and find out where we can intersect and where we might diverge.”

Professor Fish points out, “Because we are teachers as well as scholars, we may have a particular kind of depth that professors from other colleges may can gain from us. I think it’s a two-way street.”

The fate of a mining town, and claiming authority

During her residency, Professor Fish plans to research and write an essay on film produced by and centered on the Sami, semi-nomadic indigenous people of Norway, Sweden, Finland and the Kola Peninsula of Russia.

Specifically, she will focus on Kiruna, a mining town in arctic northern Sweden built on the lands of the Sami, and developed by a state-sponsored mining firm, LKAB.

Today, says Fish, who has traveled to the region and published widely on environmental justice and other related issues, the drilling extends so deeply into the ground that the town’s foundations are shaking, making it unsafe and forcing residents to relocate.

Professor Carlacio’s summer research project will deepen her scholarly research into Sojourner Truth, an enslaved African who escaped with her infant daughter to freedom in 1826, and emerged as a leader in the abolitionist and women’s rights movements.

“Though much has been written on Sojourner Truth in the context of her ‘Ain’t I a Woman?’ speech, few have studied the complex ways in which she claimed a spiritual authority that enabled her to defy political and social conventions governing women’s activism in the nineteenth century,” says Carlacio.

Both professors plan to develop new courses for their students at BMCC, partially based on research they complete in their residencies at NYU.

“I think many of our students come from cultures that intersect with the cultures of indigenous people,” she says. “Sherman Alexie was one of the readings for my English 101 class, and students were very interested in what he has to say about life on the reservation.”

Professor Carlacio will develop a writing intensive course, “Wit, Wisdom and Courage: Women and Social Movements in the United States.”

“I’m going to look at women and social movements,” she says. “I’m going to start with abolitionism and look at how women were central players in that movement, especially at a time in history when women weren’t political leaders and weren’t really allowed to speak in public. In fact, they were castigated for speaking in public.”

The class will also look at labor history and the gay rights and women’s rights movements in the sixties, Carlacio says, “So we’re going to look at a century and a half of activism.”