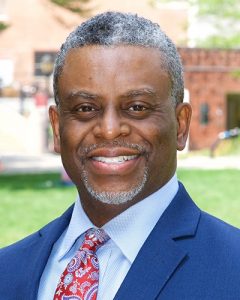 One of President Munroe’s first actions at BMCC was to create the Race, Equity and Inclusion (REI) Steering Committee. He also established the President’s Fund for Excellence and Innovation, which has launched a wave of projects at BMCC that build community and student engagement, engage anti-racist pedagogy and open conversations vital to student success and the BMCC mission.

President Munroe serves on the Board of Directors of SCUP, the Society for College and University Planning; COMBASE, a consortium of community and technical colleges; HETS, the Hispanic Educational Technology Services; CHEA, the Council for Higher Education Accreditation, and the Commission on Student Success at the American Association of Community College Students (AACC). He is also an Advisory Board member of the New Jersey City University Doctorate in Community College Leadership program and has been appointed to serve as a member of the Steering Committee of the Presidents’ Alliance for Higher Education and Immigration, effective October 2022.

As a result of his advocacy for equity in higher education, President Munroe was named a Power Player in Education 2022 from PoliticsNY and has been granted honors including the Heritage Award 2022 from the Consulate General of Jamaica, New York and the 2020 Paragon Award for New Presidents from the Phi Theta Kappa Honor Society. To build transfer bridges for BMCC graduates, President Munroe has led partnerships with Morehouse College, Pace University, Baruch College, CUNY, and others. He is an international expert on disparities in health care and has joined BMCC staff and faculty in events including the 2022 international conference of the Health, Wellness & Society at the University of the Witwatersrand, Johannesburg, South Africa.

President Munroe joined BMCC after serving as president of Essex County College, New Jersey and Malcolm X College of the City Colleges of Chicago system. He has also served as executive director of organizations including Family Health Services in the NYC Department of Health, where he oversaw a $200 million budget and more than 100 service sites. Named one of the top 25 minority health care executives in the U.S. by Modern Healthcare Magazine, President Munroe is a first-generation U.S. citizen who grew up in the Bronx and attended NYC public schools. He holds a Master of Business Administration from the Kellogg Graduate School of Management at Northwestern University, and both a Master of Public Health and Doctorate in Education with a concentration in health education, from Columbia University, Teachers College.