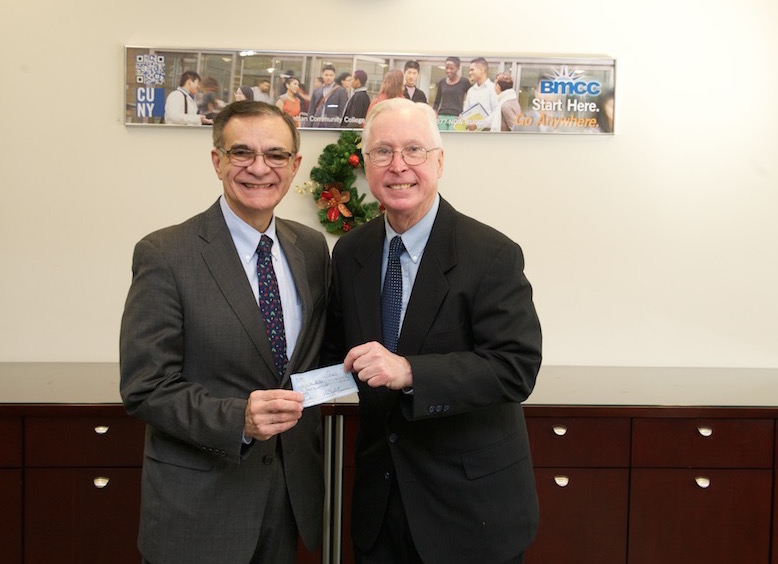 Paul Cameron, a 1968 BMCC alumnus, has established the Major Paul J. Cameron (USAF, Retired) Endowed Scholarship to benefit BMCC students. On December 20, Mr. Cameron met with BMCC President Antonio Pérez in the President’s Conference Room, pledged $25,000 to establish the Scholarship Fund and presented his initial gift of $10,000 to the President.

Paul Cameron earned an Associate degree in the Transfer Program at BMCC in 1968, and went on to earn a Bachelor of Arts degree in Economics from Queens College, CUNY, and then a Masters in Public Administration at the University of Oklahoma. Next, he joined the United States Air Force, becoming a navigator on a refueling aircraft. “I fell in love with flying,” he says, and retired from the military as a Major after 20 years of service.

In 1991, “during the big recession,” he says, “I went into residential real estate,” and when the 2008 recession hit, he switched his focus to contribute time to alumni and other groups.

The years have given Mr. Cameron a valuable perspective on what it means to be a college student.

“When I was at BMCC,” he says, “we just paid a general fee, and bought our books.” Today’s students, who often work part or full time while they attend classes, “are living in a different world,” he says. “I don’t think people are aware of the straits that college students, including BMCC students, are in today.”

Mr. Cameron is also involved in reaching out to other BMCC alumni — especially those who graduated in the first five years of the college — for a special event to be held next year. “I think it’s important for people to remember their roots, not just the last school they graduated from, but the first,” he says.

“It is also important for our current students to realize that those who came before them care,” said President Pérez. “It impacts on the students and on more recent alumni, when an early graduate of BMCC remembers his roots and returns to contribute to the college today.”

Early alumni, says Doris Holz, Vice President of Development and Chief Operating Officer of the BMCC Foundation, “have seen the economy peak and crash; they have seen workforce trends come and go, and they have a sense of what is important, underlying the changes that come with time. With this gift, Mr. Cameron is sending the message to today’s BMCC students that their education is worthy of investment, and that they will be part of an exciting future. We are very grateful to be able to put the Major Paul J. Cameron (USAF, Retired) Endowment Fund in place. The endowed fund will remain in place for years to come so that investment income on the fund can be used to support scholarships for BMCC students well into the future.”