BMCC is mourning the loss of one of its own. Miosotis Familia graduated with an Associate in Liberal Arts degree from BMCC in Summer 2009. She went on to work as a medical assistant before serving as a law enforcement officer in the New York Police Department for 12 years, a career which came to a tragic end on the night of July 4. 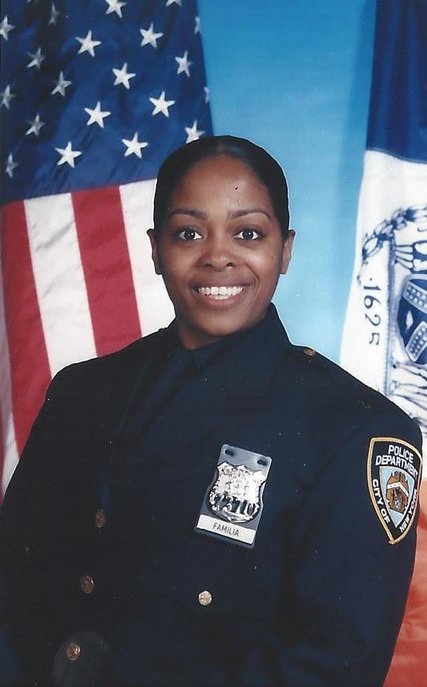 “Miosotis Familia will be remembered for many things, including her determination to gain an education and earn her Associate degree,” says BMCC President Antonio Pérez. “She attended BMCC from 2000 to 2005, then returned in the summer of 2009 to complete one final class and graduate. Her unwavering goal was to help her fellow New Yorkers and she accomplished that goal; first as a medical assistant and then as a law enforcement officer. We are proud to count Miosotis Familia among the alumni of BMCC.”

The NYPD’s Officer Down Memorial Page states that Familia, 48, was “shot and killed from ambush as she sat in a marked mobile command post vehicle at the intersection of East 183rd Street and Morris Avenue in the Bronx.” Officer Familia was taken to St. Barnabas Hospital and pronounced dead about three hours later.

According to an article in the New York Daily News, Familia had switched about three weeks earlier from working days in central booking at the 46th Precinct stationhouse, to working the night shift, in order to have more time with her 12-year-old twin son and daughter. Familia also had a 20-year-old daughter.

An article in The New York Times reports that Officer Familia, who grew up in the Washington Heights neighborhood of Manhattan, made 76 arrests during her 12-year career with the NYPD, 23 of them in felonies. The marked van in which she was killed was intended to serve as a deterrent to a rash of shootings in the Bronx neighborhood where it was stationed.

“Law enforcement officers across New York put their lives on the line to protect and serve their communities,” New York Governor Andrew Cuomo posted on his Facebook page. “This horrific and senseless assassination is a devastating reminder of the risks these brave men and women face each day. I offer my deepest condolences to Officer Familia’s loved ones and fellow members of the NYPD. Today, we all come together to mourn one of New York’s Finest.”

NYC Mayor Bill de Blasio posted on his Facebook page, “Officer Miosotis Familia was on duty serving this city, doing the job she loved. I ask all New Yorkers to keep her family in your prayers.” The Mayor also ordered flags on all city buildings to be flown at half-mast in Officer Familia’s honor.