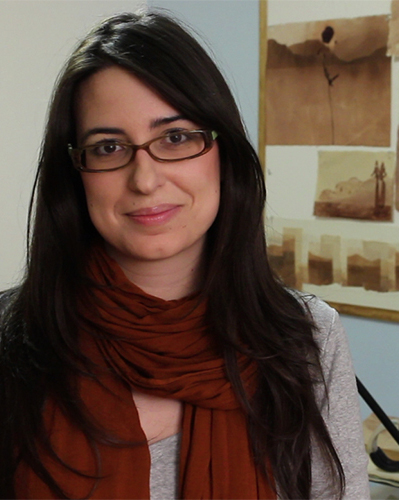 Prof. Victoria H. Febrer is committed to the vital role of visual art education as a force for lasting positive social and environmental change. She believes that a critical arts practice empowers us to not only to explore and appreciate the world we live in, but also to share our unique discoveries and points of view with our communities.

Prof. Febrer was born in New York to Spanish parents and divides her time between New York and Valencia, Spain. Since graduating from the Cooper Union School of Art, where she received a full merit scholarship, her artwork has been shown in solo and group exhibitions in the United States, Spain, Italy, Belgium, Ireland, and Japan. In addition to exhibiting in galleries and at universities, she has shown in unconventional and unexpected spaces, including the botanical gardens of Villa Monastero (Aletheia, 2019) and the Former Church of San Nicolau (Blu, 2016). Her artwork has also been projected onto the façade of the Organization of American States (Art after Dark, 2015), in public transport corridors in Japan and NYC (Toride International Video, 2014 and Under the Subway Video Art, 2012-13), and onto homes and public spaces as part of the Digital Graffiti Festivals (2012-15). Her paintings are included in numerous public and private collections including the Hispanic Society of America, Fundación Bancaja, and the Universidad Rey Juan Carlos.

Prof. Victoria H. Febrer was the first instructor of fine art to ever receive the American Association of Colleges & Universities’ K. Patricia Cross Award for Future Leaders in Higher Education recognizing her art curriculum’s focus on developing civic engagement through the arts. She has led workshops at the Cooper Hewitt Design Museum and at Yale University’s Department of Political Science, among others.

She is the founder of Febrer Arts, which brings together a team of expert teaching artists specializing in Visual Arts and Design who believe that a rigorous education in arts and design empowers students to think analytically and critically and gives them the tools to positively join the dialogue about making our world a better place. The organization provides arts education services to schools and museums, and is committed to a multi-generational teaching model that incorporates mentorship of junior teaching artists while providing instruction to young art students.

For the past six years, she has taught intensive studio classes for teens, including Portfolio Preparation, at the 92nd Street Y Art Center where she also mentors apprentice instructors through their Teaching Assistant program and works with the 92Y Center for Arts Learning and Leadership to provide arts instruction in NYC public schools. She has previously taught at the Cooper Union, where she was also the Administrative Coordinator of the Saturday Program for High School Students, Nassau Community College, Stony Brook University, and the Center for Arts Education Future Arts Initiative, a multi-year federally funded program where she mentored a cohort of NYC District 29 art teachers on best practices for incorporating contemporary art.

3 CRS.2 HRS.2 LAB HRS.
EDU 203
EDU 203 (Art in Education)
This course is an introduction to the theories, methods and materials for integrating visual arts into the elementary school curriculum. Through reading, writing, and viewing of visual art and participation in hands-on studio projects, student will explore the intellectual and emotional importance of expressing creativity through visual art.
Course Syllabus

Full Tuition Merit Scholarship, The Cooper Union for the Advancement of Science and Art, 2003-2008.