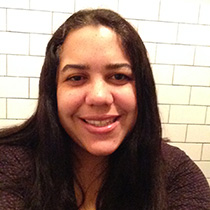 Jill Toliver Richardson is Associate Professor of English at the Borough of Manhattan Community College and at The CUNY Graduate Center where she teaches in the M.A. Program in Liberal Studies. Her book, The Afro-Latin@ Experience in Contemporary American Literature and Culture: Engaging Blackness, the result of a Woodrow Wilson Career Enhancement Fellowship, was published in the Afro-Latin@ Diasporas Series at Palgrave Macmillan (2016). She guest edited a special issue on Afro-Latina/o Literature and Performance for Label Me Latina/o: Journal of Twentieth and Twenty-First Centuries Latino Literary Production (Summer 2017). Additionally, Professor Richardson has published her work in the journals Label Me Latina/o and CENTRO. She is the recipient of a CUNY Chancellor’s Fellowship for her next book project, which examines literature, film, and music centered on the experiences of the hip hop generation including the trauma inflicted through heightened forms of violence, policing and surveillance instituted in black and Latinx communities during the Crack Era/War on Drugs of the 1980’s and 1990’s.

3 CRS.3 HRS.
ENG 358
ENG 358 (Contemporary Urban Writers)
This course focuses on the literature of urban America since 1950 and in particular on how contemporary writers use the images and themes of the city.
Course Syllabus