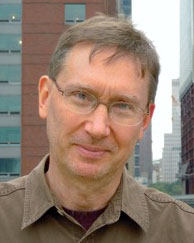 Andrew Levy is the author most recently of Artifice in the Calm Damages (Chax Press, 2017), Don’ÃÂt Forget to Breathe (Chax Press), Nothing Is In Here (EOAGH Books), and Cracking Up (Truck Books), along with eleven other titles of poetry and prose including, The Big Melt (Factory School), Paper Head Last Lyrics (Roof Books), Ashoka (Zasterle), and Values Chauffeur You (O Books). His writing works on the intersections of poetry & politics, class & racial division, the ecology of commerce & environment, economic & social justice, improvisational & experimental music, journalism & media convergence, the nature of language & religion, and the technologizing of the word & freedom. Levy’s poems and essays have appeared in numerous American and international magazines and anthologies including The Gertrude Stein Awards in Innovative American Poetry, Telling It Slant: Avant-Garde Poetics of the 1990s, LITSCAPES: Collected US Writings 2015, and An Anthology of 60 Contemporary American Poets (Zasterle, Spain, 2017). He was co-editor and publisher of the poetry journal Crayon with Roberto Harrison, 1997-2008. In addition, he fosters collaborations between musicians and writers on improvisatory poetry readings and performances.

6 HRS.
ENG 095
ENG 095 (Intensive Writing)
This is an upper-level intensive developmental writing course for students scoring between 43 and 55 on the CATW. Students are instructed in basic components of effective writing, including word selection, punctuation, spelling, grammar, sentence structure and paragraph development. Students are given frequent in-class writing exercises that focus on argumentation, narrative, and description as modes of developing ideas. Individual conferences with instructors are frequent.
Course Syllabus
3 CRS.4 HRS.
ENG 101
ENG 101 (English Composition)
English Composition is the standard freshman writing course. The course introduces students to academic writing. By its conclusion, students will be ready for English 201 and for the writing they will be asked to do in advanced courses across the curriculum. Students completing ENG 101 will have mastered the fundamentals of college-level reading and writing, including developing a thesis-driven response to the writing of others and following the basic conventions of citation and documentation. They will have practiced what Mike Rose calls the "habits of mind" necessary for success in college and in the larger world: summarizing, classifying, comparing, contrasting, and analyzing. Students will be introduced to basic research methods and MLA documentation and complete a research project. Students are required to take a departmental final exam that requires the composition of a 500 word, thesis-driven essay in conversation with two designated texts. Prerequisite: Pass the CAT-R and CAT-W or Accuplacer tests
Course Syllabus
3 CRS.3 HRS.
ENG 201
ENG 201 (Introduction to Literature)
This is a course that builds upon skills introduced in English 101. In this course, literature is the field for the development of critical reading, critical thinking, independent research, and writing skills. Students are introduced to literary criticisms and acquire basic knowledge necessary for the analysis of texts (including literary terms and some literary theory); they gain proficiency in library and internet research; and they hone their skills as readers and writers. Assignments move from close readings of literary texts in a variety of genres to analyses that introduce literary terms and broader contexts, culminating in an independent, documented, thesis-driven research paper. By the conclusion of English 201, students will be prepared for the analytical and research-based writing required in upper-level courses across the curriculum; they will also be prepared for advanced courses in literature. Prerequisite: ENG 101
Course Syllabus
3 CRS.3 HRS.
ENG 300
ENG 300 (Fundamentals of Journalism)
Fundamentals of Journalism offers an introduction to the practice, purpose, and history of journalism as projections about its future. The course addresses journalism in all its forms and media, e.g. film, print, radio, television, and Internet-based platforms, including Web sites, blogs, Twitter. It provides a foundation in journalisma??s professional code of ethics and the work of a free press to safeguard social liberty. Skills cultivated will include information gathering establishing credibility, writing, editing and dissemination. Prerequisite: ENG 101 and ENG 201
Course Syllabus
3 CRS.3 HRS.
ENG 303
ENG 303 (Journalism: News Writing)
This course covers the basic principles and practices of news reporting and writing. Students are taught to write single-incident news stories, conduct balanced interviews and edit their own copy, employing standard copy editing symbols and format. Emphasis is also given to the theoretical side of journalism with an overview of its history, present legal controls, ethical issues and rapidly expanding technology. Pre-Requisite: ENG201 or ENG121
Course Syllabus
3 CRS.3 HRS.
ENG 304
ENG 304 (Journalism: Feature Writing)
This course provides further opportunities for students to explore journalism. Students conduct interviews, cover stories around the city and write journalistic articles. Opportunities are provided for specialized coverage in areas such as politics, consumerism, science, education, finance, the arts, social change and family life. Topics include layout, headline composition and basics of journalism law.
Course Syllabus
3 CRS.3 HRS.
ENG 311
ENG 311 (Creative Writing Workshop)
The objective of this course is to sharpen students' creative writing skills in the genres of the short story, poetry and drama, depending on students' interests and ability. Pre-Requisite: ENG121 or ENG201
Course Syllabus
3 CRS.3 HRS.
ENG 333
ENG 333 (The Short Story)
This course acquaints students with the wide range and varied forms of the short story as it developed in America, Europe, and other continents. Readings will include works by male and female authors of different periods and nationalities, and some attention may be paid to the historical development of the short story as a genre, as well as the cultural contexts in which the assigned stories were written. Pre-Requisite: ENG101 and ENG201 or ENG121
Course Syllabus
3 CRS.3 HRS.
ENG 345
ENG 345 (Modern Poetry)
The goals of this course are to stimulate an appreciation for, and an enjoyment of, poetic masterworks mainly of the 20th century. This course includes critical reading and writing; its approach is an in-depth study of poetry which has universal significance. Writers studied include T.S. Eliot, W.H. Auden, Dylan Thomas, e.e. cummings, Pablo Neruda, Langston Hughes, Theodore Roethke, Gwendolyn Brooks and Sylvia Plath.
Course Syllabus