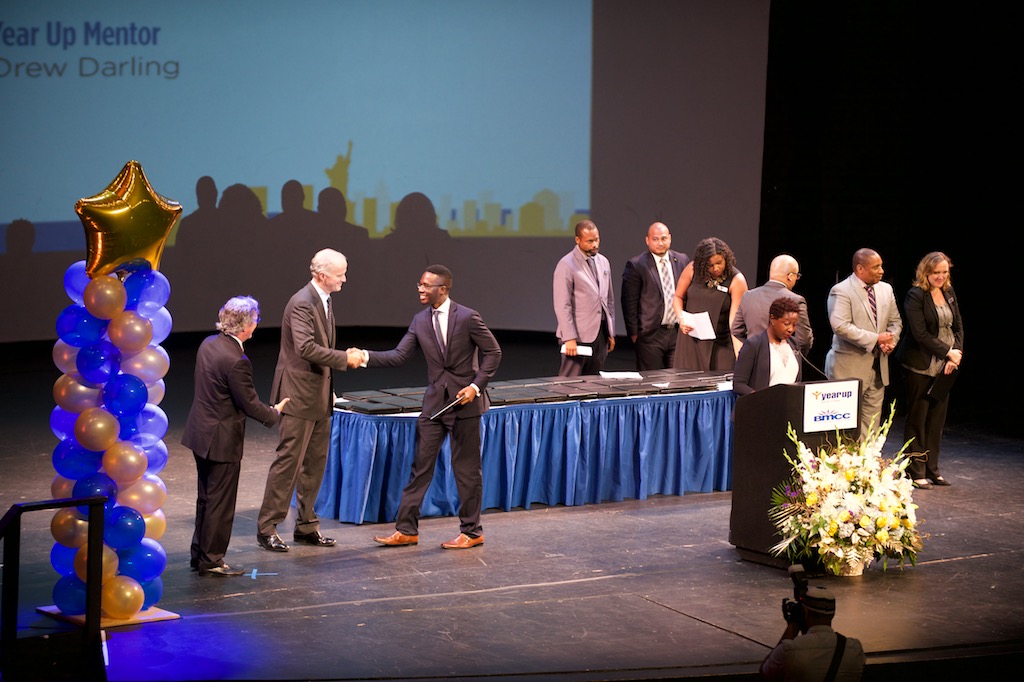 As a finance intern at Synchronoss, BMCC Accounting major Anthony Nuñez turned classroom learning into hands-on skills development. “I served as a syndicate between three teams: accounting, taxation and billing,” Nuñez says. “This means I micromanaged and archived the activities of 30 accounts, downloading and reviewing bank statements. I also converted and tracked travel and entertainment receipts into an Excel spreadsheet, and reconciled bank transactions.”

The opportunity to immerse himself in these tasks was made possible by Year Up, an intensive, one-year program that mentors students as they complete internships in some of New York City’s leading corporations and nonprofits.

Nuñez (pictured below) was one of 35 BMCC students included in the 21st Class Graduation Ceremony of Year Up, held August 1 in the BMCC Tribeca Performing Arts Center Theatre at the College’s main campus on 199 Chambers Street. 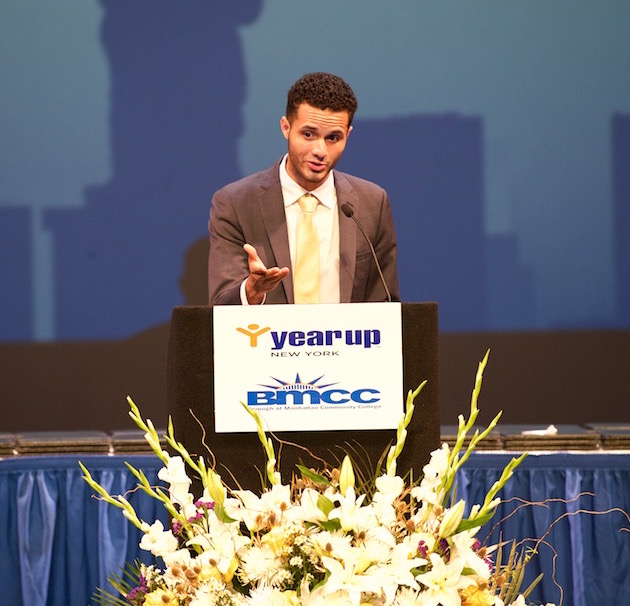 A total of 115 participants were honored at the event, which was opened by Year Up alumna Krystal Smith. “You made it,” she told the audience, “the papers, the deliverables, and all those elevator pitches.” Year Up President Garrett Moran, a former COO of the Blackstone Private Equity Group, encouraged the graduates “to keep you eye on the horizon when you have those tough days, lifting others while you climb.”

Before the graduates received their awards and certificates, Year Up graduate Morris Hilton spoke of his experience with the program, quoting Winston Churchill: “Success is not final, failure is not fatal.” Nuñez also took the stage. “I share with you an inclusive, historical journey,” he said, “one that recognizes our strengths regardless of race, religion, gender or sexual orientation.”

While still in the interviewing process, a dozen of the graduates have landed full-time positions in companies including New York Life Insurance Company, Turner & Townsend, Neuberger Berman, State Street Corporation, The College Board and KKR.

“I have an interview soon with an accounting firm that only works with nonprofits,” says Nuñez. “I would be excited to get that position and have the chance to visit the organizations they serve.”

He has one more semester at BMCC, and in addition to applying for jobs, has applied to the BMCC program Refining Each Ascending Leader (REAL), which presents guest speakers from the business sector and other fields. Nuñez, who has made the Dean’s List, is a member of Phi Theta Kappa and president of the college’s Toastmaster’s Club, feels confident about the busy schedule he is putting together.

“Year Up has prepared us for doing full-time school and full-time work at the same time,” he says. “I took 12 credits of classes while I completed my internship, which was another four credits, over a six-month period. I was able to do it because the staff at Year Up is there for us the whole way. You feel like you have an overwhelming amount of support, from the social workers to everyone else at Year Up. Many of them left careers in the corporate sector, and they are really committed to helping us reach our goals. I definitely recommend Year Up to other students.”

For more information about joining Year Up at BMCC, call (646) 341-6800 or email admissionsnyc@yearup.org.