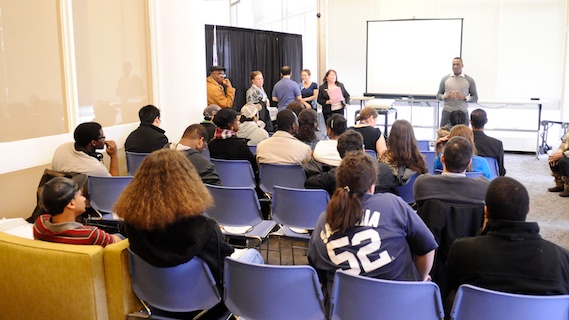 “Math can be used to connect with other sciences, opening doors for many professions,” said Morgulis in her introductory talk. “I am hoping to make The Math Lounge a tradition here on campus, with socializing, food, guest speakers, and, of course, career talk.”

Morgulis wants other BMCC Math majors—and non-Math majors—to appreciate Math and understand its importance in the real world. “Mathematics withstands the test of time,” she continued. “Languages may phase out, but the logic passed on through Mathematics is universal. It can stand alone, or as a science.”

Falling in love with Math

Manyah Patel, an Applied Mathematics major who currently attends Columbia University, was in the S-STEM program at BMCC, and an Honors student. She presented the Math Lounge audience with a slideshow presentation about Fractals called Self-Similarity and Fractional Dimension.

“I loved doing research at BMCC,” Patel said, referring to Math professor Marcos Zyman as a mentor during her time at BMCC. She advised math students to, “explore the many ways Math works in the real world.”

“I fall more and more in love with Math every day,” she concluded in her talk. “I really do…and hopefully if you stay on a similar track, you will too.”

Patel, who grew up in India and maintained a 4.0 during her time at BMCC, recently won a New York State Mathematics Association of Two-Year Colleges Award (NYS-MATYC) scholarship.|

The Math Lounge’s second featured guest, Youri St. Fleurant, who grew up in the Caribbean, graduated from BMCC in 2006 and currently works at an architecture and engineering company in Manhattan.

St. Fleurant explained that his interests in physics and civil engineering made him major in math at BMCC.  “Math majors can work in different fields—but know what you like.”

He encouraged students to always work in math in some capacity. “Tutor, volunteer or sit in on the Math class of a former teacher so you don’t forget the basics, like Excel—being well-rounded will open so many doors for you.”

St. Fleurant attended CUNY-City Tech after BMCC, and landed his job shortly after his studies at City Tech. He advised Math students to let their professors know what types of job they’d like to pursue. In fact, it was a professor who introduced St. Fleurant to his current job.

“Make connections, keep the same email address and phone number,” St. Fleurant advised the students before they broke into groups to math-themed games such as KenKen and Mancala that were arranged on tables in the room.

“Remove the concept from your mind that math is difficult, and keep going in school…pursue that four-year Math degree.”