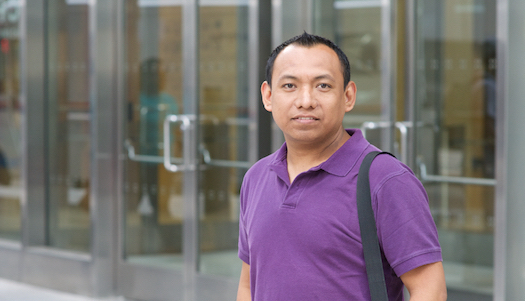 The State University of New York, Manhattan Educational Opportunity Center (SUNY MEOC), which is administered by Borough of Manhattan Community College (BMCC/CUNY) and located on 125th Street in Harlem, received a five-year renewal of its funding from the Federal TRIO Programs of the U.S. Department of Education.

SUNY MEOC will be awarded $1,184,480 from September 1, 2016 through August 31, 2021, and serve 5,000 participants — low-income individuals, first-generation college students, and individuals with disabilities — as they progress through the academic pipeline.

That pipeline varies according to the goals of the individuals being served, such as Francisco de la Cruz — a BMCC Liberal Arts major who grew up in Mexico City and aspires to become an emergency room nurse.

The long road to a degree

“Before I started at BMCC, I took the CUNY entrance exams and when I didn’t pass, I was referred to the BMCC CLIP program to work on my English,” says de la Cruz.

At the same time, he honed his academic skills in BMCC’s CUNY Start program. While there, his class hosted a guest speaker, Stacy Cummins — Coordinator of the Strategic College Initiative, and Project Director of the College Connections Project at SUNY MEOC — who invited the students to use their services.

“I didn’t understand how school works in New York,” says de la Cruz. “Stacy helped me with the applications and the paperwork for financial aid. She helped me understand the types of majors and transfer choices I had in college.”

He has referred other BMCC students to Cummins, who “helps them with any paperwork with CUNY, and solving problems students might have. She really is good at that.”

Eventually, with his English and academic skills in better shape, de la Cruz entered BMCC as a matriculating student.

“Going to school had always been one of my dreams. I have always wanted to be a nurse,” he says — but he will be graduating in December 2016 with an associate degree in Liberal Arts, not Nursing.

Despite a GPA of 3.6, de la Cruz did not pass the entrance exam to the nursing program. So, he came up with a backup plan; to complete his coursework at BMCC while attending the Certified Nursing Assistant (CNA) program at Technical Institute of America in New York.

“It was hard going to two schools at one time,” he says, “but I wanted to stay in the medical environment” — and he did, working as a CNA in a nursing home in the Bronx, while completing his associate degree.

He also made a point of taking health-related classes to fill his elective requirements at BMCC, and availed himself of the free CPR classes offered through the BMCC Office of Public Safety.

Throughout his college experience, de la Cruz stayed in touch with Stacy Cummins at SUNY MEOC, and she helped with his application to the nursing program at Lehman College, CUNY.

“I’ll be starting in Spring 2017 after I graduate from BMCC in December 2016,” says de la Cruz. “While I’m studying at Lehman, I will continue to work as a CNA.”

He looks forward to working as a nurse in an emergency room one day — a goal which now seems within reach.

“As nurses, you have to figure out the right treatment for each person when they come in the door,” he says. “It’s a busy place, but I get bored, doing only one thing.”

Like many students, de la Cruz’s academic accomplishments have been hard won.

“It doesn’t matter how long it takes me to get my dream,” he says. “Obama says, ‘We can do it’, and I believe that. If people are persistent, if we get the help we need, we can achieve our goal. Si se puede. I love what BMCC says, ‘Start Here, Go Anywhere’. That’s very true.”