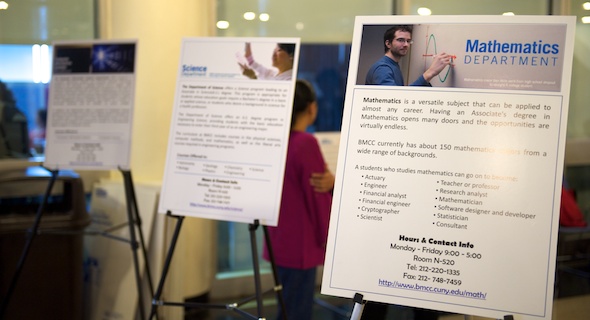 STEM in Your Future, a recent CUNY Month event, reached out to students considering a major in one of the STEM disciplines: science, technology, engineering or math.

Held in Richard Harris Terrace on the college’s main campus, participants shared tables with STEM professors, and met other students who are considering, or are already immersed in STEM studies.

How one STEM major got her start

She also shared with the audience, how she got to that point in her career. “It feels like being back home here,” said Nieto-Wire, who graduated with honors from BMCC, and earned two associate’s degrees; one in science, and one in engineering.

Today, she is committed to promoting other students’ success, and supporting their access to research through the LSAMP (Louis Stokes Alliance for Minority Participation) Robotics Project—having benefited, herself, as a recipient of the LSAMP Bridge to the Doctorate Scholarship.

Nieto-Wire—who also received the Alliances for Graduate Education and the Professoriate award, the President’s Fellowship (MAGNET) award, Science Fellowships and other honors—encouraged students to explore the bridges in place at BMCC that could link them to further academic success.

“I didn’t have much command of the language, when I started at BMCC,” said Nieto-Wire, who grew up in Colombia, “and I found here, not only a quality education, but professors who were very caring, always available, and activities that allowed me to interact with the sciences in different ways.”

She also recommended that students access larger STEM communities, by attending academic gatherings such as the Urban University Conference Series, where they can talk to people about research opportunities. She screened videos that showcased her aeronautics work, as well as her interactive engineering projects, including sensor robots—controlled by touch—and those containing microprocessors.

Sefton Bennett, LSAMP Coordinator, and Everton Barrett, STEM Education Director, coordinated the event in conjunction with the President’s Office and Office of Academic Affairs, and emphasized the considerable supports available to students interested in pursuing math, technology, engineering and science at BMCC.

BMCC science major Justin Kornegay, who is working on a pharmacology research project with Professor Bramadeo Dewprashad, is aware of the special opportunities BMCC provides. “I’m don’t really know of any other schools in the boroughs where I could get that kind of experience,” he said.

In her opening remarks, BMCC Provost/Senior Vice President, Office of Academic Affairs Sadie Bragg asked the student audience what “STEM” stands for, and Kornegay was the volunteer who stood to recite the words behind the acronym: science, technology, engineering, math.

He chose BMCC for his start in science, he said later, because the answer is ‘yes’ to one key question: “Is it ‘doable’?” meaning, “Are the professors going to work with you, if there’s something you don’t understand?”

Reaching students who, unlike Kornegay, haven’t yet discovered the abundant opportunities to be mentored at BMCC—all of which make the STEM majors “doable”—VP Bragg also asked, “How many of you are doing research with a faculty member?” A few hands went up, which led to her next question: “And what are the rest of you waiting for?”

Her comments set the tone for informal conversations over refreshments, after the event, as students who are working toward a STEM degree talked with those who are still deciding which direction they want to go in.

Prince Vontee, a computer science major from Liberia, is also contemplating a move to a STEM major. “I’m thinking I should consider electrical engineering,” he said. “I’m working on hardware, and programming devices. There is always an electrical component.”

A chance to network

Romeo Beato, a science major who is also on the staff of the new BMCC student newspaper, The Panther Gazette, was at the event to learn about internships. “I heard there might be a rep from Brookhaven Labs,” he said, referring to a second speaker, Noel Blackburn, Educational Programs Administrator at the Brookhaven National Laboratory who, because of a family emergency, was unable to attend.

Even so, Beato made good use of his time networking with fellow students, as did Lisa Bloodgood, who is studying environmental science at BMCC, and focusing on hyper-accumulating plants, those that absorb toxins at higher levels, affecting soil remediation.

Staff attended the STEM event, as well. “I work with all the people here, all the faculty and students,” said Joy Dunkaley, Access Services Librarian. “They need materials for their research, and we need to know the necessary data bases and books to order.”

These included, “Eight people are at a table. Each person shakes hands with the person to his left and right. What is the total number of handshakes?” The answer, it turns out, is a deceptively simple “eight”—something a STEM major ‘gets’, almost immediately.

Other Math Challenge questions included: If you roll a coin four times, what is the probability of getting exactly three heads? (one out of four), and what is half of two to the 20th power? (two to the 19th power).

As the event closed, participants lingered to read poster displays on topics such as the effects of butyrate and omega fatty cells on cancer cells, the physics behind the construction of a wall, the mathematical cantor set, and others.

Making use of a few minutes of down time before the room was cleared out, science major Kornegay worked to finish his biology homework on the development of marsupial frog eggs. One of his science professors, Manita Pavel, sat at the same table; when she had won a book bag in the raffle at the end of the event, she handed it straight to Kornegay, who was happy to get it.

“Students who are considering a STEM major choose BMCC because they want the research opportunity to develop biotechnical skills, and to have a hands-on lab experience,” Pavel said—though a little encouragement goes a long way, too.