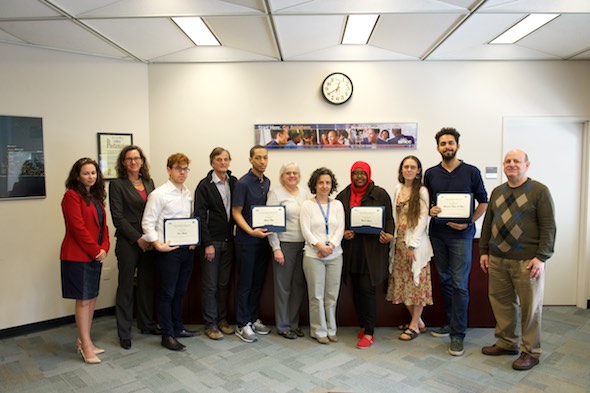 The 2015 student winners with their mentors.

To find out what students are learning at BMCC, you have to look further than a course catalogue.

The aisles will be teeming with students and professors craning to see over each other’s shoulders, but it’s well worth squeezing your way through, to check out what’s on exhibit.

What you find might surprise you. Can metal-tolerant bacteria rid the environment of toxins? Does the economy impact expectations of women and fashion?

An interesting array of research questions characterized the 60 posters created by 125 students at this year’s Research Poster Presentation in Richard Harris Terrace on April 23.

Participating in research helps students learn practices such as surveying current literature related to their research question, and assessing the validity of their evidence.

It also “provides a foundation which is essential for a smooth transition to four-year colleges as the student’s next career step,” says BMCC science professor and molecular biologist Alexander Gosslau, who attended the poster event.

“A hands-on, faculty-mentored research experience is very important during the first two years of college, a time period most critical in retention for the students,” he says, adding that it “is very rewarding for the students but also for faculty, because it reminds us of when we were students, ourselves.”

A wide range of research projects

The 125 student presenters presented research in the biological and social sciences, mathematics, computer information systems and other areas.

Poster presenters Lionel Colon, Aned Gomez and Finola Fung-Khee—who are working with BMCC science professors Matthew Andria and Sarah Salm—engaged passers-by in conversation about their research to determine if bacteria can be used as a bioremediation tool.

“In other words,” said Gomez, “can we use bacteria to clean up the environment?”

Bernadette Schaefer, who worked closely with social science professor Elizabeth Wissinger, summarized her research based on images of women from the early 1900s to the present.

“Every time there is a shift, or a boost in capitalism, as well as the accompanying capitalist ideals, there are significant changes in the notion of ideal female beauty,” Schaefer said.

Another poster presenter, John Woody, served in the U.S. Air Force and then returned to college on the G.I. Bill. Guided by engineering professor Mahmoud Ardebili, he is investigating the use of nanotubes to increase tensile strength of steel.

The applications of his research “include elevator cables and other important structural components,” Woody says, “and eventually, it could make it possible to have buildings that are twice the height they are now.”

In a sense, the poster is a conversation starter as student researchers engage visitors with a one- or two-minute summary of their project.

They learn to answer questions and refer to information on the poster as they meet faculty browsing the session—some of which might be keeping an eye out for potential lab assistants.

Not for nothing, but poster sessions are also a way to celebrate hard work.

Everyone at the BMCC Annual Poster Session was recognized with a lavish lunch buffet. An opening ceremony featured students’ slide presentations of their work, and Provost Karrin Wilks said a few words to the group: “The stars of the show are the students and the faculty. It’s a testament to the academic excellence here at BMCC and I’m really proud, really excited. The buzz here is just fantastic.”

A team of three judges circulated throughout the event, visiting each of the 60 posters and assessing them with a set of criteria including whether they featured a clearly defined hypothesis.

Seven posters—a total of nine student presenters—were selected by the judges, and each winning team received $500 toward travel to present their poster at a national or international research conference.

“Thanks to Professor Peskoff’s generous donation, we were able to expand the number of students receiving an award this year,” said Director of Research, Helene Bach.

“The poster session at BMCC has been going on for many years but this is only the second year that we are offering travel awards to national conferences. We nearly doubled the number of students from last year and have outgrown the space.”