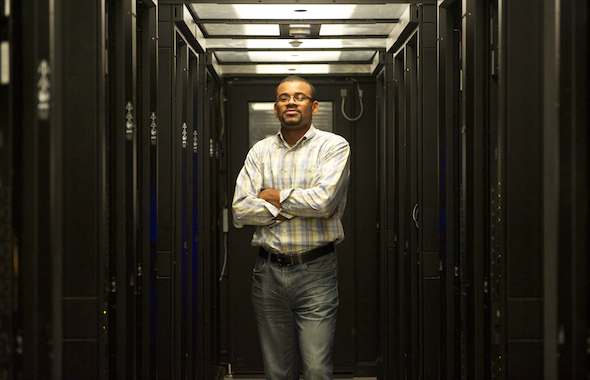 The youngest of ten children, Pierre Bouzi grew up in Jacmel, Haiti. After graduating from high school, he moved to the Bronx, New York, to live with his sister.

“Creole is my first language, French is my second language and English my third,” he says. “I came to BMCC first to take a class to improve my English.”

In 2003, Bouzi graduated from BMCC with an associate degree in computer science, and next earned bachelor’s and master’s degrees in electrical engineering at The City College of New York, CUNY.

Today, he is finishing up his doctoral degree in electrical engineering at Princeton University.

“All my siblings have a bachelor’s degree but so far I’m the only one with a graduate degree,” he says, adding that his parents didn’t attend high school and “were from the outskirts, the rural part of Haiti. My dad was in the business of coffee; he would buy from different merchants and sell to people that would ship it. My mom was a tailor.”

‘You don’t have to do it alone’

What was it like, going from the urban campuses of BMCC and City College, to the small-town setting of Princeton, New Jersey?

“At City College you walk from one building to another and you encounter people from 50 different nations,” Bouzi says.

“At Princeton, everyone is friendly and supportive and I don’t think any student ever feels they are treated differently because of their color, but still, not seeing people on the street who look like you can be intimidating at first.”

For those in his footsteps he advises, “You don’t have to do it alone. Find a friend, somebody that you can work with and talk to. Every college has groups of students to study with, so find those.”

Bouzi’s interest in lasers began at City College, where “the first lab I went into, with Professor Roger Dorsinville, was a photonics lab,” he says.

“A laser is a light that’s extremely coherent; it doesn’t spread out like a flashlight,” he explains.

“It’s not only the physics behind it, that interests me, but applications like remote sensing and medical diagnostics.”

Professor Dorsinville, an LSAMP mentor, connected Bouzi with an internship at Corning, Inc., a manufacturer of glass and ceramics that works with fiber optics.

Bouzi also took part in an exchange program with the KTH Royal Institute of Technology in Stockholm, Sweden.

Those experiences helped prepare him for Princeton University, working toward a Ph.D. in electrical engineering with a focus on quantum cascade lasers.

“Their light emission falls into the mid-infrared region of the electromagnetic spectrum, where most molecules of interest have strong rotational and vibrational resonances. These molecules include greenhouse gases such as carbon dioxide, methane and nitrous oxide.”

This all relates to air pollution, he explains, “and in order to regulate it, we have to monitor and measure it—and that’s part of what you can do with these lasers.”

The rewards of hard work

“When I was at BMCC I worked at a Pizza Hut in Times Square,” says Bouzi.

“The schedule wrapped around my classes. And when I was at City College I worked as a security guard from midnight to eight in the morning—then I went to class at nine.”

In the defense itself, he says, “you have to be able to explain your research and potential applications to a committee of three professors, and they ask questions. The audience can ask questions, too.”

Afterwards, “they have a closed-door meeting then call you back in, and assuming all went well, they shake your hand, and say ‘Congratulations, you’re now a doctor!’ And you have cake and champagne.”

In Summer 2014, Pierre Bouzi completed an internship at the U.S. Naval Research Laboratory in Washington, D.C.

“I was working on an optically pumped magnetometer; a sensor that can measure the strength of magnetic fields.”

He intends to return there for post-doctoral work, and has this final advice for students interested in science and engineering.

“Two things I didn’t know about were internships and summer research—so I took summers off when I was at BMCC—and that was a mistake. The more internships and research you do, the better. You get more experience and you make connections.”

He adds that it’s critical “to think long term. The earlier you can pinpoint what you want to do, the better. Maybe you want to be with a particular company, or be a professor down the road. It’s going to keep changing, but if you have the slightest idea of what you want to do, BMCC is where you should start planning for that.”