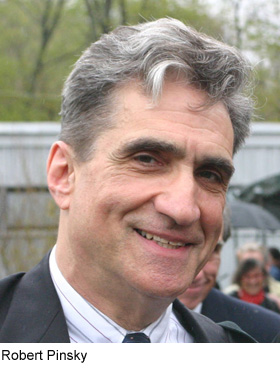 On Tuesday Feb 6th the former poet laureate Robert Pinsky will be here speaking on Robert Frost and William Carlos Williams. A Q&A will begin at 6 p.m. in the Hudson Room and the event will start at 7 p.m. in Theater 2.

The session will be filmed by Bookspan, a joint-venture between Time Warner and Bertelsmann which controls Book of the Month Club.

The event is co-sponsored by Poets House, the Poetry Society of America (PSA), and BMCC’s Tribeca Performing Arts Center.

Robert Pinsky is an American poet, essayist, literary critic, and translator who served in the post of Poet Laureate Consultant in Poetry to the Library of Congress (known popularly as the Poet Laureate of the United States) from 1997 to 2000. Pinsky is the author of nineteen books—most of which are collections of his own poetry—but including critically-acclaimed translations of the Inferno from Dante Alighieri’s Divine Comedy and a collection of poems by Czeslaw Milosz.

Pinsky has become a figure within popular culture through a satirical guest-starring role in a 2002 episode of the animated sitcom, The Simpsons entitled Little Girl in the Big Ten.

Poets House is a 45,000 volume poetry library and lively literary center that provides a center of discussion and research for writers, students, scholars, and the general public five days a week, free of charge. Its online Directory of American Poetry Books is a cumulative, annotated index of all the books that have been in the Showcase (since 1990) and is available, free, at www.poetshouse.org.

The Poetry Society of America, along with Poets House, are America’s pre-eminent poetry organizations. They received a major grant from theNational Endowment for the Humanities, (NEH), to bring Branching Out: Poetry for the 21st Century—Series Two—to seven cities across the United States. This continues and expands on the first series of talks by distinguished poet/scholars on classic and contemporary poets.

The schedule for the rest of the series this spring is as follows: