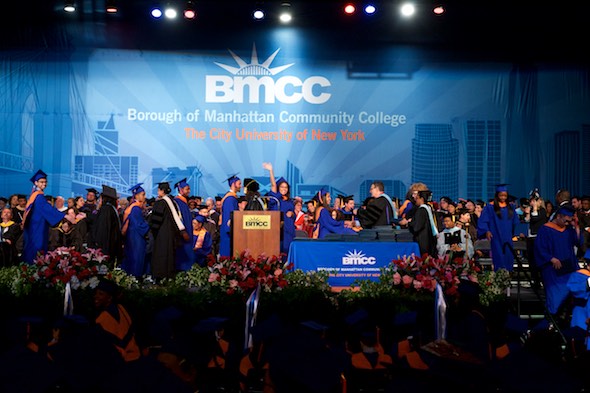 Five recent graduates of Borough of Manhattan Community College, The City University of New York (BMCC/CUNY) were just awarded a full scholarship to the New York University (NYU) College of Arts and Science through POISE, the Pipeline Opportunities for Inter-College STEM Education Program.

POISE is a collaborative effort between BMCC and the Academic Achievement Program (AAP) within NYU’s College of Arts and Science (CAS). It creates a pipeline linking BMCC students to bachelor’s degree programs at NYU where they continue their education in STEM (Science, Technology, Engineering and Math), as well as in psychology and related majors.

The awardees began their participation in POISE while still attending BMCC.

“This allowed them to become familiar with the NYU environment and to connect with like-minded students at NYU through the various programs,” says Michael Hutmaker, BMCC Dean for Student Affairs.

“The POISE program provides a unique opportunity for our students to attend and succeed at NYU, while minimizing their financial strains.”

Once enrolled at NYU, the POISE students will meet on an ongoing basis with a specialized CAS advisor as well as with an accomplished peer mentor. They will attend a leadership retreat in Fall 2015, take part in workshops at NYU’s Wasserman Career Center and have access to NYU’s Learning Center tutoring workshops as well as other resources.

The POISE participants will also be eligible to join the student leadership groups Women of Excellence, Strength and Tenacity (WEST) and Gentlemen of Quality (GQ). The POISE scholarships will extend over two years.

“We are proud of all of the students that were a part of the POISE program while they attended BMCC,” says Hutmaker. “They achieved much while at BMCC; outstanding academic achievement, research with faculty, and various student leadership positions. We look forward to seeing what they will accomplish as they continue their academic careers, at NYU.”