A grant-funded partnership between the Borough of Manhattan Community College (BMCC/CUNY) Teacher Education department and P.S. 125, (the Ralph Bunche School) an elementary school in central Harlem, has helped transform it into a more diverse progressive model school. The partnership has also provided BMCC students critical hands-on field experience that is inspiring them to become New York City public school teachers.

BMCC Professors Cara Kronen and Rebecca Garte secured the three-year $409,000 grant in Fall 2016 from the W.K. Kellogg Foundation which funded the Comprehensive Educator Empowerment Program at P.S. 125. The program’s goal was to create a center of scholarly activity that would serve Harlem’s children through best practices instruction by BMCC faculty and also provide a more diverse training ground for BMCC’s underserved community college students. 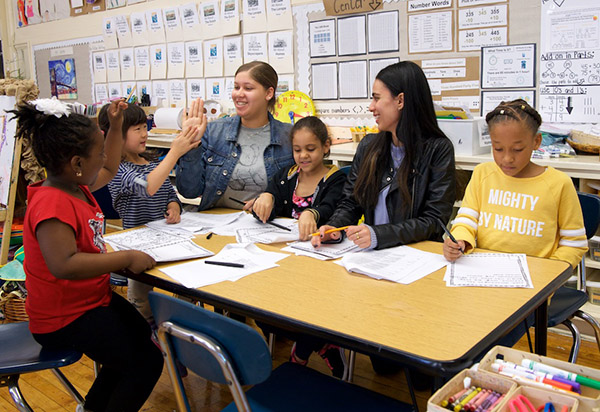 Preliminary numbers from the three-year program show four-year retention rates for the BMCC Teacher Education majors who did their fieldwork at P.S. 125 was, on average, almost ten percent higher than those who did not.

“A comprehensive partnership between a New York City public school and a community college has never been done before,” said Garte.

The partnership positioned BMCC on the cutting edge of service training for community college students and professional development of public school teachers, she said.

BMCC formed the relationship with P.S. 125 in 2015 just a few years after the school’s current principal Reggie Higgins had assumed his position. For years, low enrollment had taken a toll on the elementary school’s budget and despite a pedagogical style that taught to standardized tests, scores were low, as was staff morale. Parents from the community were largely seeking out charter schools or other options where they could send their children for a quality education.

“We wanted to change the conversation at P.S. 125,” said Higgins. “We thought if we can stabilize the ship, we could reevaluate what we need to do from the teaching side and develop best practices that would allow children to show the mastering of course materials.”

Higgins’ hope was to transform the school’s pedagogy from strictly direct instruction, to that of a progressive model. The progressive education philosophy stresses that educators should honor children’s natural curiosity and teach them how to think critically, rather than just relying on rote memorization.

“Implementing a progressive model would breathe new life into the school and eventually increase enrollment and diversity among the students and families in the rapidly changing neighborhood,” Higgins said. “Progressive education has largely been reserved for the upper middle class, it boxes out an entire demographic of children and families.”

In 2014, after a series of meetings with community stakeholders, neighborhood activists and the New York City Department of Education, an agreement to refocus P.S. 125’s pedagogy to a progressive model was forged that would enlist the expertise of BMCC Teacher Education faculty.

In Spring 2015, BMCC Professors Cara Kronen and Rebecca Garte began working on a project that would intensify the partnership between the BMCC Teacher Education program and P.S. 125. The Kellogg grant funded this mission. Garte and Kronen then recruited BMCC faculty to provide professional development workshops that would introduce aspects of progressive education to P.S.125 teachers and staff and then support its implementation.

Joyce Dye, a kindergarten teacher in her third year at P.S. 125 said the involvement and mentorship of BMCC early childhood educators was invaluable.

“The BMCC faculty provided assistance with room arrangement, teacher to child interaction strategies, age appropriate materials for areas of the classroom and other areas,” said Dye. “The activities given to teachers during the professional development workshops was a time for self-reflection on how children’s needs and their developmental levels were being met.”

There is now a waiting list at P.S. 125 and the school’s student body has grown increasingly diverse. Among the 297 students currently enrolled, seven percent are Asian, 37 percent Hispanic and 21 percent are white. This in a city where 71 percent of public schools are considered to be intensely segregated while only 23 percent diverse.

Research shows that students in diverse schools perform better on proficiency tests than students in segregated schools according to the National Coalition on School Diversity.

BMCC Teacher Education Early Childhood students are required to complete two consecutive semesters of fieldwork in pre-kindergarten through second grade classrooms. For many years, those placements happened at schools near BMCC where there was a dearth of diversity among the students. Garte and Kronen wanted to know how fieldwork placement in a more diverse setting might impact BMCC student’s academic performance.

During the first semester, BMCC Teacher Education students were assigned to a teacher in a classroom at P.S. 125 where they focused on learning about child development. Staying with the same teacher in the second semester, the students collaborated and created action research plans. With funds from the grant, BMCC students ordered some of the semester’s books and classroom materials. They were also required to create action research plans and proposals.

“It’s important for the Teacher Education students to feel as if they are playing a central role and an important part of the classroom,” says Garte. “If they feel engaged, they are more likely to commit to completing the academic journey to becoming a teacher.”

In Fall 2018, 74 percent of BMCC Teacher Education majors were either Black or Hispanic according to the BMCC Office of Institutional Effectiveness and Analytics.

“Our community college students are a large pool of future teachers who could potentially diversify the teacher workforce in New York City,” said Garte. “Research shows that children in New York city schools benefit from having teachers who look like them.”

Amy Scoufaras, a second grade teacher at P.S. 125, said the experience BMCC students get from fieldwork is important because the students have an opportunity to put what they learned in college to the task in the classroom with children who are going to learn from them.

“You can only learn so much from a book, while coming into the classroom and working with the P.S.125 students one-on-one, gives them a true classroom experience,” said Scoufaras.

She says it takes a special person to be able to make a successful classroom environment for so many different children.

“A Teacher Education program like BMCC’s not only helps teachers, it helps train future teachers in areas where we need them most,” said Scoufaris. “In order to change the conversation and make teaching a better career, we first have to honor the role of teachers as human beings. The human connection is invaluable.”

Early Childhood Education major Yeilyn Grullon says her ultimate goal is to become a teacher in a neighborhood like the one she lives in now. She said she wants to be able to connect with her students and let them know, “I live down the block just like you, I can relate.”

On a typical day at P.S.125, Grullon and the other BMCC students arrive in a classroom and join in where children are already at stations, playing or drawing or the science station.“Right now, we’re learning about snails. We took them to the park across the street, where we dug through mud and looked for snails and worms,” she said.

The pre-kindergarten class is also learning about the science behind decomposition. Grullon says she is “amazed” by how much a child’s brain can absorb in such a short period of time.

“What takes us a week to learn and retain, they can learn in a day,” said Grullon.

Grullon grew up in Brooklyn and moved around a lot and attended a number of different New York City public schools with many different teachers. But, it was her second grade teacher who left the most lasting impression, she said.

“She had short hair and bangs, and she was so kind to me, and even at that age, helped me believe I was a capable person when she encouraged me to research dolphins,” said Grullon who explained, as that as a child, she loved the aquatic mammals.

“I want a child to grow up and say that about me some day.”