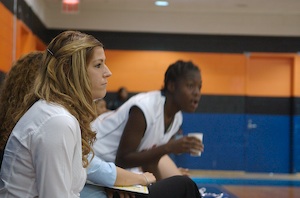 BMCC’s newest women’s basketball coach, Danielle Madden, didn’t have the first season she was hoping for, with the team finishing just 1-17 overall. However, all bets are that Madden will turn the team around and, in the coming years, find success in the CUNY Athletic Conference.

Madden, a former five-sport star at Brooklyn College, joined BMCC last year after serving as head women’s basketball coach at St. Edmund’s Prep in Brooklyn, where she took her team to the Brooklyn-Queens Championship in 2001 and an impressive 76-41 record over the course of her six-year stint there.

“Women’s and men’s basketball are very different games, but I treat my players no differently because they’re women,” Madden says.

Her first priority, she says, is to teach and reinforce fundamentals, leveraging the strengths of each player while addressing their weak spots. “If a girl is a decent shooter but needs help with her passing, it’s her passing that we’ll work on the most.”

“Playing team sports is a great preparation for life,” she says. “You learn discipline — the important of showing up for practice on time, taking direction from your coach, and dealing with people with different personalities.”

At the start of each fall, she tells her players the same thing: “Remember why you’re here — to get an education.”

After that, it’s down to business.

“There was certainly be a lot of running,” she says. “I want make sure that everyone was in good shape — and that we’re able to field a competitive team.”

And even after a rough start to her tenure at BMCC, Madden is already setting goals.

“Obviously, I’d love to see us win a championship — or at least post a .500 record,” she says. “But more importantly, I hope that the girls come away having learned something from the experience — not that they just showed up every day and went through the motions, but that they really learned something about the game of basketball, made some friends, and really enjoyed themselves.”