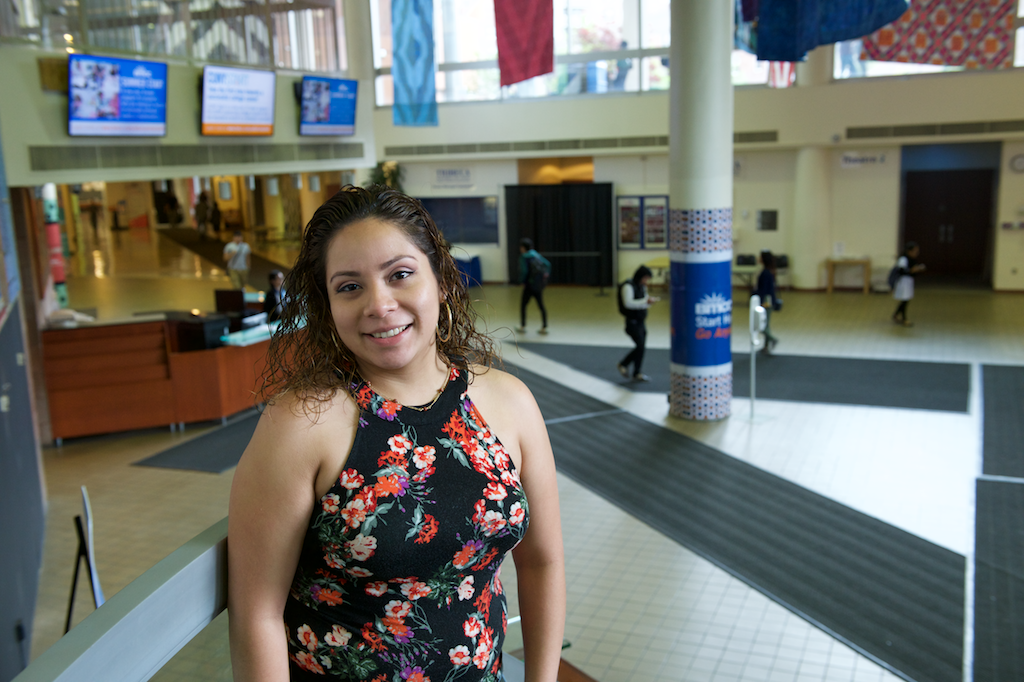 Jennifer Campos, who just earned her High School Equivalency diploma through the Adult Literacy Program in the Center for Continuing Education and Workforce Development at BMCC, is a winner of the 2016 Peter Jennings Scholarship. She will be honored along with nine other awardees at a ceremony and reception at the CUNY Graduate Center, 365 Fifth Ave, New York, NY on June 16 at 9:00 a.m.

The $1,000 scholarship will be applied to Campos’ tuition when she enters BMCC in Fall 2016 as a human services major. Next, she is considering a transfer to City College of Technology, CUNY, to major in radiological technology. “I’m still deciding between social work and working as a radiology technician,” Campos says. “I have always been interested in helping young adults or children in the foster care system, and that would be within the human services field. But I am also interested in the medical field. Maybe someday those two fields will come together for me.”

Campos does not take these decisions lightly. “From ‘Day One’, she was all about the work,” says Mark Lance, a teacher of mathematics in the BMCC Adult Literary Program. “If she was talking during class, it was to help a fellow student at her table. In sports they call it ‘leading by example’.”

Campos did not always think of herself as a leader. “I fell behind in high school and dropped out when I was in 10th grade at the age of 17,” she says. “Eight months later, I was a mother. Another year brought another wonderful baby and I dedicated myself to my daughters. My life revolved around them. However, I knew that I had to make a change in my life.”

That change began by looking online at adult education programs, then attending an orientation at BMCC. “I really liked the staff and the energy there,” she says, but she found the program a challenge. “I made progress, but it wasn’t easy. I had to wake before my daughters, do some chores, and finish my homework before making breakfast. Studying wasn’t easy with a one-year-old and a three-year-old at home. I read when the girls were sleeping, to strengthen my reading comprehension and vocabulary. It was a struggle, but everyone struggles.”

In December 2015, Campos took and passed the Test Assessing Secondary Completion, earning her High School Equivalency diploma. “I received the news in the mail,” she said. “I was so happy I cried. My oldest child understands how important school is. She’s three, almost four. She gave me a hug.”

Her next challenge was passing the CUNY Entrance Exams, a requirement to enroll in a degree program at BMCC. “I passed the reading and writing but not the math,” she says. “I’m going to be in the Summer Start program at BMCC to work on that. It’s July 5 to August 12; all day, four days a week. On the last day, August 12, we take the math test again.”

Her inspiration, she says, is her sister, Edna Rocio Campos. “Although we are Mexican-American women who come from generations of poverty and uneducated people, my sister was determined to break that cycle,” Campos says. “She was the first in our family to graduate with a bachelor’s degree and is about to start her master’s degree in childhood/special education and bilinguial extension at City College.”

Campos also credits support from her fiance, Johnny Cardozo. “We barely saw each other during the week,” she says. “When I was home, he was at work and when he was home, I was at school.”

At the Laurel Award ceremony on June 16, she will be one of the featured speakers. “They told me to talk about my experience at BMCC,” she says, and adds that she will also talk about her family and goals. “I constantly tell myself that if my sister was able to do it, then so can I.”