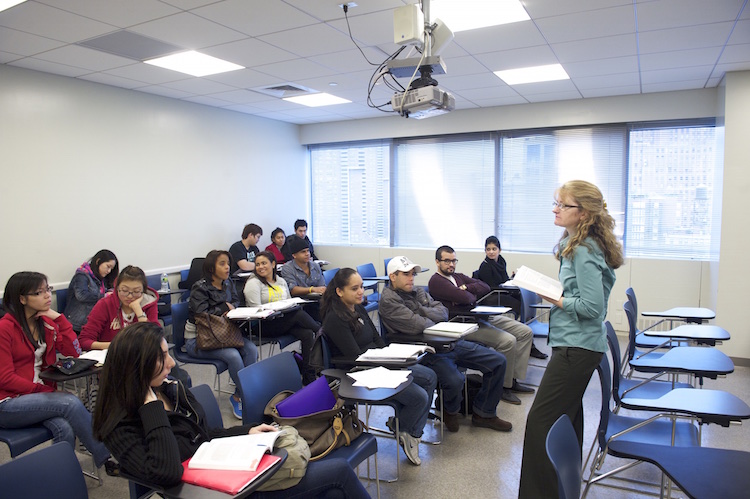 The 2017 Winter Immersion Program at Borough of Manhattan Community College (BMCC/CUNY) saw the pass rate for ESL students spike to 71 percent, a significant increase from the 2016 Winter Immersion English as a second language (ESL) pass rate of 49 percent.

According to Janice Zummo, Assistant Dean for Academic Support Services at BMCC, the increased pass rate can be attributed to extending each ESL class session by one hour. In the 2017 Winter session, ESL classes met for five hours — instead of four — for all 12 days of the program.

The BMCC Immersion Program serves students who need to complete developmental reading, writing, or mathematics as well as ESL requirements in order to move on to credit-bearing courses. The Immersion courses are free of charge, highly concentrated and scheduled in sessions throughout the academic year, with the largest session occurring in summer.

The Immersion Program also offers students the opportunity to work with faculty in a smaller classroom setting.

“We had 574 students complete the Winter 2017 Immersion sessions, and in addition to the pass rate for ESL spiking to 71 percent, the overall pass rate for all three programs; ESL, reading and mathematics, was 86 percent,” Zummo said. “This is a great program for students who want to maximize their time and save money in a developmental workshop.”

Upcoming Immersion workshops include a four-week session in March, as well as a concentrated Spring Break session. In Summer 2017, there will be two sessions, one in June and another in July.

Only about 10 percent of incoming BMCC freshman pass all three of the incoming CUNY entrance exams and are exempt from taking a developmental course.

“Students entering BMCC in Fall 2017 are highly encouraged to take a summer immersion course, and get a head start on their requirements to graduate,” said Zummo. “This builds retention, because once students get the developmental courses out of the way, they move on to credit-bearing courses and closer to graduation.”