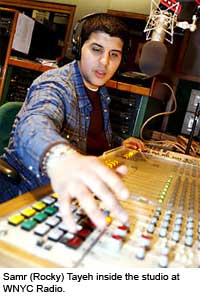 Samr Tayeh, who likes to be called “Rocky,” has gone through a physical and emotional metamorphosis that has given him a new lease on life. According to Clem Richardson of the New York Daily news who interviewed Rocky, the Park Slope, Brooklyn resident “is just enjoying life with a smaller body. He has shed more than 200 pounds since undergoing Lap-Band surgery just over a year ago, and the change in his life has been, well, life-changing.”

When Rocky was in high school, the 6-feet-1 weighed nearly 400 pounds, joined WNYC’s “Radio Rookies “program, which trains young people with no radio experience how to record and produce stories about themselves and their communities.

What he did next was both courageous and beneficial to Rocky and to others in the community. He took on his obesity and went public with it on the radio. As Richardson puts it, “his radio spot, ‘My Struggle with Obesity,’ was emotionally wrenching in part because Rocky used his microphone like a camera and didn’t flinch when words it caught cut to the bone.” “The microphone became my friend “I took it with me. I felt better when I spoke into it; I could tell it things.” Rocky said.

“My Struggle with Obesity” aired in November 2003, and as Richardson reports, “coincidentally around the same time health officials noticed that our country was suffering a national crisis of obesity, particularly among young people. Nervous that he had given his tormentors more grist for their insult mill with the piece, Rocky instead found that it made him an overweight media star.”

He became a radio phenomenon. “He received a flood of calls, letters and e-mails that far from ridiculing him applauded his determination and resolve.” Hi life took another upward turn when in 2005 he appeared on “The Jane Pauley Show,” in a spot on obesity, where he met, Arkansas Gov. Mike Chickadee, who lost 100 pounds through diet and exercise, and Dr. George Fielding, an Australian doctor who is the pioneer of the Lap-Band surgery procedure to lose weight.

A year after meeting Fielding, Rocky had the Lap-band surgery. “In the Lap-Band technique, a fluid-filled balloon with a valve is inserted around a portion of the stomach. The valve, which is accessible from a port on the patient’s skin, can be inflated or deflated to increase or decrease stomach size, regulating how much the person can eat. He credits it with his weight loss.”

According to the Daily News columnist, “Rocky is loving his new life. Now a freshman at Borough of Manhattan Community College, he enjoys sitting at regular desks and walking up the stairs and escalators to class instead of finding the elevator.”