Culture, color and composition come together for a special art exhibit as part of BMCC’s celebration of African Heritage Month “Empowerment – Awakening the Strength that Lies Within.”

With the help of BMCC Professor Horace Brockington, BMCC was loaned an outstanding collection of African-American paintings and sculptures titled, “History Takes Place,” currently on display in the newly renovated Breezeway, located on the 2nd floor of the 199 Chambers Street Building near Theatre I.

The exhibit will be on display from February 18 through March 6 and includes 10 pieces that have been generously loaned to BMCC from the private collection of Mr. Tom Burrell. The paintings and prints include works from Charles Alston, Romare Bearden, Hale Woodruff, Gordon Parks, Sam Gilliam and Ed Clark.

To celebrate the special exhibit, BMCC is hosting an opening reception on Tuesday, February 25, from 5 p.m. to 7 p.m.

Some of the featured pieces include: 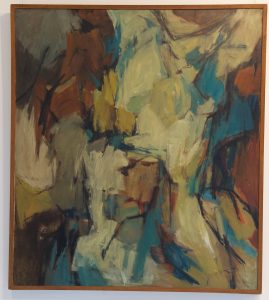 “Icarus,” Hale Woodruff (1900-1980); the vertically oriented oil on canvas work depicts an abstract composition of the Greek myth of Icarus. Utilizing broad, painterly stokes, the artist has manipulated shade of ochre, sienna, white, blue, black and grey to create a visually appealing interplay between line and form that portray the figural subject in the struggle of his melting wings.

“In the Garden,” Romare Bearden (1911-1988); the vertically oriented handcolored lithograph depicts an ebony-skinned woman in her lush garden. With the proper right hand held high, she is dressed in a pink and white gingham dress, and a straw cap tied with a ribbon, the woman carries a basket of harvested orange-colored blossoms Green foliage, and red blossoms grown around the woman’s bare feet; beyond the subject figure, a white bird is positioned near the left of the picture plane, in front of a bright-vermillion colored building rises, meeting a green mountain and a purple sky. 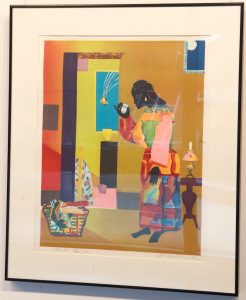 “Falling Star,” Romare Bearden (1911-1988); the vertically oriented color lithograph depicts an ebony-skinned female figure in an interior scene. Dressed in a colorful, long-sleeved outfit, and with her feet bare, the subject figure is positioned just right of the composition’s center. In the lower left corner, a basket of clothes is positioned, just beyond the threshold to a bright green bedroom. A window is visible near the center of the composition, within the green bedroom, a shooting star can be observed against the blue sky that fills the window. 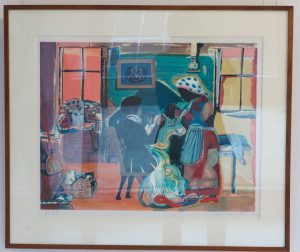 “Quilting Time,” Romare Bearden (1911-1988); the horizontally oriented lithograph depicts two Black figures engaged in quilting. Positioning near the center of the composition, a figure in a black outfit with a thick, white collar faces the right of the picture plane, and holds a turquoise hued quilt in their hands; to the right of the figure in black, also seated and engaged in the act of quilting, is a woman dressed in red shoes, a maroon dress, a blue apron, and a white and blue head scarf. The two figures are positioned in an interior space, with a broom and scraps of fabric gathered in the lower left corner, fabric draped upon a wooden bench beneath a window near the upper left, and a rich, blue-paneled wooden wall filling the remainder of the background. 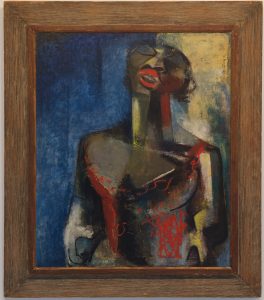 “Blues Singer,” Charles Alston (1907-1977); the vertically oriented oil on canvas work depicts a Black female jazz singer. Rendered in an abstract style, against a vertically bifurcated blue and white background, the singer tilts her head back in exultation. Eyes closed, and red lips open wide, the singer is dressed in a deep-cut red top that exposes a considerable amount of the upper chest. Red line drawing vortexes and accents the chanteur’s costume, reaching upward along the narrow straps of the costume. 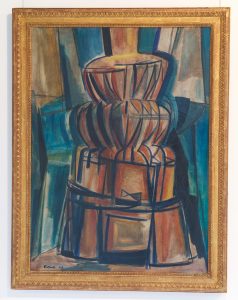 “The Stove,” Ed Clark (1952); the vertically oriented oil on canvas painting is a Cubist inspired depiction of a coal-burning parlor stove. At the bottom of the oven, the small ash-removal door with a bow-shaped handle is slightly ajar. Tessellated lines form movement and an intriguing pattern along the body of the vintage stove, rendered in dark blue and russet hues. Rich turquoise blue fills the background of the work in an angular format, providing contrast.

The exhibit is being featured in the Breezeway, which was recently renovated by BMCC’s Buildings and Grounds. The Breezeway art wall has been constructed with a built-in wiring system and backlighting to highlight the featured pieces.