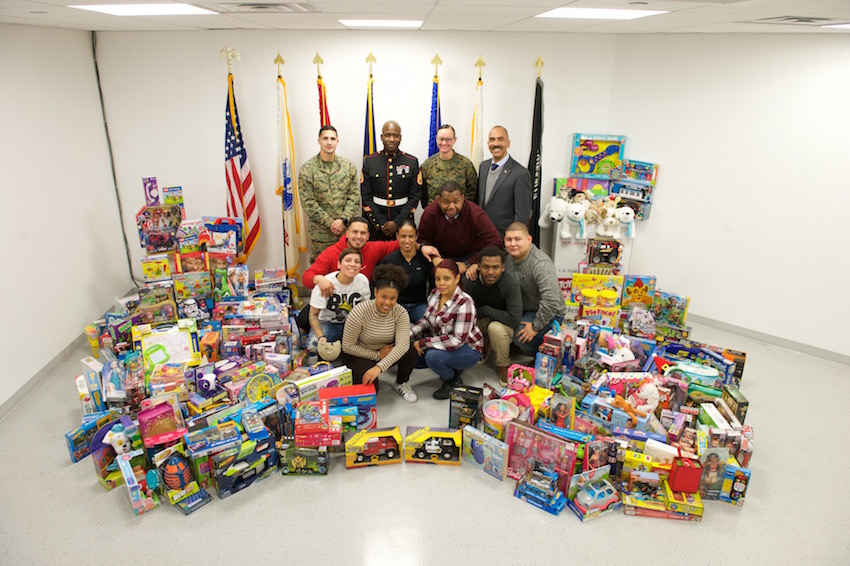 Students in the BMCC Out in Two program make a commitment not only to their studies, but to improving their communities by providing community service. This year, the BMCC Out in Two students encouraged the BMCC community to donate canned foods and other non-perishable items to the Food Bank for New York City.

Items were collected through December 15 in holiday-themed boxes at the Academic Advisement and Transfer Center at 199 Chambers Street.

“We collected almost 500 cans of food as well as non-perishables such as pasta,” says Richard Naughton, Senior Academic Advisor and Out in Two Coordinator. “Almost a hundred Out in Two students contributed enthusiastically to this effort to give individuals and families in New York a happy holiday season. We dropped off the collected items at the New York Fire Department, Engine 7 Ladder 1, on Duane Street, about three blocks from campus. They are a designated drop off site for the NYC Food Bank.”

Through Tuesday, December 27, the BMCC Sisterhood Society of the Women’s Resource Center (WRC), in collaboration with New York Cares, is hosting a coat drive. The BMCC community is invited to donate gently used, wearable coats for families in need. Coats can be dropped off at the WRC, Room S340 at 199Chambers Street. For hours the office is open and more information, call the WRC at 212-220-8165.

“The coat drive is a New York City tradition,” says Deborah Parker, Director of the WRC. “As the temperature drops, we are reminded of the struggles many of our fellow New Yorkers face. Adults as well as children are in need of coats to protect them from the harsh winter. Every year, the number of coats we collect increases, and this year so far we have collected almost 200 coats. That’s 200 lives made a little better, by our efforts as a community.”

BMCC student veterans Elizabeth Vasquez and Vaniah Temple, along with the Veterans Resource Center, helped collect toys for the non-profit Toys for Tots, which distributes them to families throughout New York City.

“We applied to be a drop-off spot and organizations and agencies in the area; Merrill Lynch, LECO Corporation, BNY Mellon, the IRS, the Office of the Attorney General, Verizon, Metromedia and others, as well as faculty, staff and students, contributed toys,” says Vasquez. “Now the Marine Corps Reserve is going to separate what we collected by age and gender.”

Last year, BMCC collected four large boxes of toys, and this year, she says, they filled eight large boxes with close to 300 toys.

To learn more about other upcoming holiday and new year events hosted by BMCC, click here.