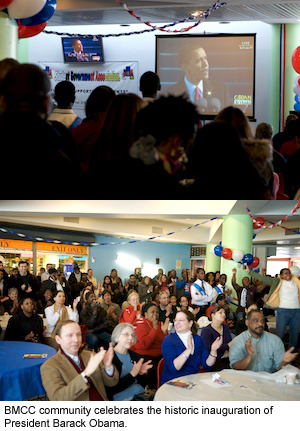 Chants of “O-BA-MA!” rang out through BMCC’s main building Tuesday as some 300 people gathered in the college’s cafeteria to watch the historic inauguration of the nation’s first Black president, Barack Obama.

Students, faculty and staff huddled tightly together, their eyes fixed upon the large screen, drawing closer to picture as the clock approached noon. When Obama appeared and took his oath as the 44th U.S. president, jubilation hit the cafeteria: clapping, yelling, and cheering filled the room until Obama began his speech.

The event, organized by the Student Government Association (SGA), produced a crowd that surprised SGA President Horace Henry. Henry said he would have been happy if 50 people showed up, considering BMCC is between the fall and spring semesters right now.

“We didn’t expect this many people … this was great,” said Henry. “The crowd was really into it, too. The same thing that was happening in Washington, DC, was happening here, today, at BMCC.”

Some BMCC administrators gave video testimony shown on the big screen after the inauguration. Most reflected on the Civil Rights Movement and the battle for equality.

“I never thought I’d see the day when an African-American or Black person would be president,” said G. Scott Anderson, vice president of administration and planning.

For many, it was a sign that true change has come to America.

“I am so proud, as a Black man in America, to see that we have moved forward so much,” said SGA Senator Joseph Baugh, who chaired the SGA panel that organized the event and lead the ceremony. “One man cannot change the world, and we all need to continue pitching in … but this is inspirational.”

With the inauguration over, Henry reminded the crowd that it’s now time to look ahead.

“The ball is in our court now,” he said. “What role are we going to play in the change that has yet to come?”

The event closed out with an appearance by the BMCC Lady Panthers Cheerleading Squad, who performed a specially crafted routine for the new president. The SGA then served food to remaining attendees.