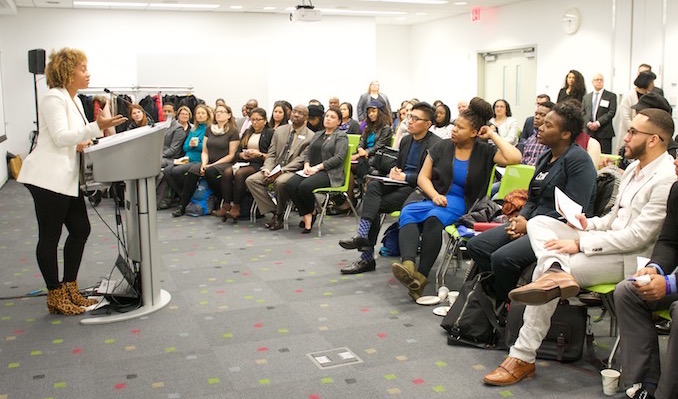 The Leadership Breakfast Series at Borough of Manhattan Community College (BMCC/CUNY) presents high-profile members of the business and finance community in free, informal talks with students, alumni, staff and faculty.

The series is held in the Fiterman Hall Conference Center, which was filled to capacity for both Fall 2017 events. On October 11, guest speaker David Steingard—CEO of Laughing Man Coffee & Tea, Director of the Laughing Man Foundation and BMCC Foundation Board Member—took the stage. On November 15, the guest speaker was Rochelle Stewart, Director of Digital and Social Strategy at Condé Nast.

“We want our students to see the leaders as role models; to feel inspired about what is possible for themselves, going forward,” says Doris Holz, Vice President for Development and Chief Operating Officer of the BMCC Foundation. “The speakers share their journeys—how they overcame obstacles and were able to succeed—and this encourages our students to persevere. For us, it is also important for business leaders who share BMCC’s mission, to support our students with internships, job shadowing and other opportunities, as well by supporting the BMCC Foundation Fund and our annual scholarship gala.”

In her talk at BMCC on November 15, Rochelle Stewart shared her experiences in college and on Wall Street, often being the only woman, and only woman of color, in the settings she found herself part of. She graduated cum laude from Georgetown University and received an MBA from Columbia Business School. Today at Conde Nast, she has doubled online traffic and engagement for brands including Vogue, GQ and Vanity Fair. She serves as a member of the Diversity Task Force and champions Conde Nast’s mission to increase diversity and inclusion. She is also a board member of the non-profit All in Together, Women Leading Change.

Respected for her acumen as a data strategist, Stewart is also known as an advocate for women. “I care about supporting those who have less of a chance,” she said during her November 15 talk at BMCC, “and that includes people who look like me, as well as others.”

During the question-and-answer session that followed Stewart’s talk, a student asked for her advice on negotiating an employment contract. “Ask for more,” Stewart said. “Women tend not to ask for more.” She also advised, “It’s less about the title and more about developing your skills.”

After the event, students continued their conversations with Stewart. “I’m here because I’m inspired to hear women in leadership positions, and I’m glad to see men in the audience because it impacts their perceptions, as well,” said Iva Porfirova (Communication Studies, ’17), former president of the BMCC Communications Club and a member of Out in Two who transferred to NYU through the CCTOP scholarship program.

“I related to the points she made,” said BMCC Liberal Arts major Sandra Nachfoerg, who was struck by Stewart’s advice for women to “stop apologizing,” especially in the workplace. “Women often have a reflexive need to apologize and be ‘polite’,” Stewart said, and Nachfoerg admits, “I do apologize a lot, but I’m working on it. I think we are afraid to show our real selves that don’t fit the box we are put in, as females.”

Having grown up in the Tribeca neighborhood of BMCC, David Steingard was already familiar with the BMCC campus when he enrolled as a freshman at age 16. After transferring to Baruch College, where he earned a bachelor’s degree in advertising and marketing, he graduated from New York Law School—but as he shared with students at his Leadership Breakfast Series talk, he was not ready to stop searching for his passion in life.

That opportunity came when Steingard was working as a criminal prosecutor in Brooklyn, and made a career change to join with actor Hugh Jackman in creating Laughing Man Coffee & Tea, a coffee shop in Tribeca, lower Manhattan. Steingard is now CEO of the coffee and tea business, and Director of the Laughing Man Foundation, which supports sustainable coffee farming in Peru, Ethiopia and other countries. He is also a member of the BMCC Foundation Board.

After Steingard’s talk on October 11, he held a question-and-answer session, and even when the event was over, students were lined up to shake his hand and introduce themselves.

According to Brian Haller, Director of Foundations and Corporate Relations at BMCC, “David shared experiences related to running a business, such as how you often don’t know exactly how to do something that is required of you, but you figure it out, because you have to. That was just one of the many points that seemed to resonate with the audience.”

Steingard agrees that students are keenly interested in the “how to” of starting a business. “Judging by the great questions they asked, it seemed they really wanted to get a sense of how I handled certain situations, such as how I started the business, and how and why I kept going,” he said. “It’s really important to demystify something as natural and wonderful as starting your own business, and hopefully our conversation gave the students more confidence to follow their paths.”