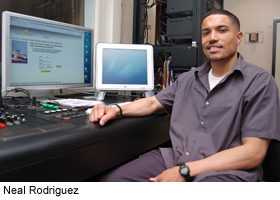 Neal Rodriguez credits his liberal arts education and especially his courses in English for his current career as Chief Technology Officer for Imperial Jets, which has moved quickly from a start-up private jet charter company with $4 million in capitalization to one quadruple the size.

Neal is full of energy and expressive about his BMCC education and the job he loves at Imperial Jets. When he speaks about both, you can see his eyes sparkle with glee.

After graduating from BMCC in 2001, Rodriguez went on to continue his studies at New York University and then began to work at Imperial Jets as its Internet Marketing Advisor. “I vividly recall a sentence from the BMCC Student Handbook that urged us to be active learners. And that’s what I’ve become. I certainly remember when I arrived at BMCC when I could hardly write and structure an essay. I worked hard in Professor Lapidus’ English classes and by the time I graduated I actually won the BMCC Creative Writing Award. It’s so amazing. It gave me confidence to express myself honestly.”

As chief technology officer, Rodriguez is proud of the work he is doing in “search engine optimization.” He goes on to explain, “I syndicate content through the Internet to establish Imperial Jets as a leading authority in the aviation industry.” By any account Neal is doing a very good job at it. Any search on Google for “private jet charter” or “private jet” or even “jet charter” puts Imperial Jets within the top seven carriers.

Neal says “There’s no accident that BMCC has influenced my ability to construct my thoughts in a logical fashion and has made it possible for me to create the content to successfully market Imperial Jets.” According to Rodriguez, only one per cent of those working in the Internet industry create all the content. “That means,” he says, “that I’m always looking for different ways to redefine Imperial Jets to the marketplace.”

So when you become a corporate CEO or tycoon, remember Neal’s copy that reads, “Imperial Jets wants your private jet travel experience to be unforgettable and stress free. Our charter carriers will get you to your destination and back, safely and on time, allowing you to focus on your business instead of occupying your time with travel arrangements. So relax ….and let us make all the arrangements for your next trip www.imperialjets.com.”