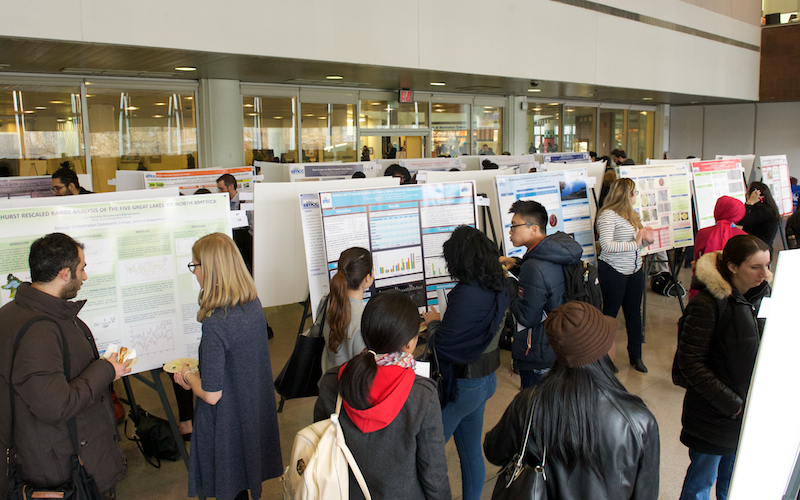 The 2016 BMCC Undergraduate Research Symposium, Faculty Panel Discussion and Poster Sessions I and II were held February 17 from 10:00 a.m. to 4:30 p.m. in the college’s main campus building in Lower Manhattan.

The day kicked off with student oral presentations in Theatre 2. Six students took the stage to narrate slides highlighting their research projects led by BMCC professors, and covering topics such as searching for gaps in active nuclei disks, and determining the degree to which tea leaves can be used to absorb toxic metals from water sources.

A faculty panel discussion followed in Richard Harris Terrace and featured Science Professor Jun Liang, Psychology Professor Marjan Persuh and Engineering Professor Kibrewossen Tesfagiorgis. “We talked about careers in the sciences, our research projects, and the importance of working with students at the community college level,” said Liang.

The day closed with two well attended student poster sessions in Richard Harris Terrace. Over 100 student presenters in 59 research projects stood beside posters, engaging visitors and answering questions about their investigations in the biological and social sciences, mathematics, computer information systems and other areas.

Science major Claude Cyriaque was on hand to discuss his research project led by Science Professor Lauren Wickstrom, “Understanding Estrogenic Mechanisms Driving Breast Cancer.” Cyriaque plans to become a physician’s assistant, and was drawn to the project “because a couple people dear to me have passed from the disease.” He explains that the research explores links between estrogens, or molecules that regulate cell tissue and growth, and parabens, molecules used as an anti-bacterial preservative in cosmetics. In addition to learning the biology of cancer and its possible causes, “Professor Wickstrom has had us learn computational modeling techniques to analyze molecular structures, and other strategies that are key in our science studies,” says Cyriaque.

Science major Evelyn Szeinbaum is working with Science Professor Patricia DeLeon on the research project, “The Healing Effect of Reiki on Human Cancer Cells and C. Elegans.” Szeinbaum, who plans to study naturopathic medicine at the University of Bridgeport after leaving BMCC, explained that as conventional pharmaceutical approaches to illness have failed, holistic healing practices have been examined as viable alternatives. Professor DeLeon, who is not only a biochemist and professor, but also a Reiki master, added that in addition to learning lab techniques, “Student researchers gain the ability to think in an analytical way and deal with the frustration and apparent defeat that is part of any research project. It makes them grow professionally and as a person.”

Judges circulated throughout the poster sessions to select six student researchers who will receive $500 each toward travel expenses to present their research findings at a national conference.

The winners of the 2016 BMCC Annual Poster Presentation are:

“This event represents the dedication and hard work of the BMCC research community,” said Helene Bach, BMCC Director of Research. “Our students and faculty are of the same caliber as those at any four-year or private school. It is important for our students to engage in research as early as possible in their academic careers. They build important skills, confidence and knowledge, and it strengthens our overall retention.”