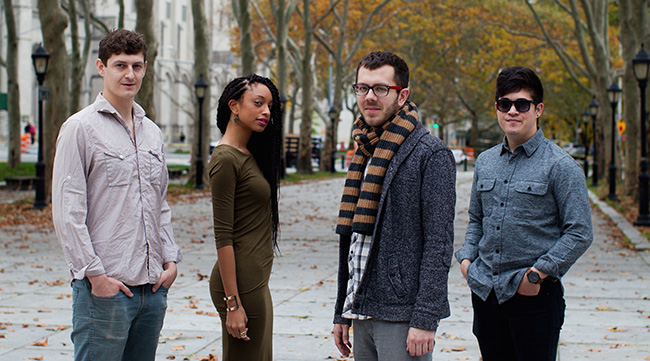 Tickets are $30 for each concert (students/seniors $20).  All performances will be held at BMCC Tribeca Performing Arts Center, 199 Chambers Street, between Greenwich and West Street.  They can be purchased by calling Ticketing Services at (212) 220-1460 or visit the BMCCTPAC website at http://tribecapac.org. Tickets can also be purchased in person by visiting the Box Office at 199 Chambers Street, Tues-Sat from 12 p.m. – 6 p.m.

Jazz in Progress: The Next Faces of Jazz is a partnership between BMCC Tribeca Performing Arts Center and the DC Jazz Festival.  DCJazzPrix, part of DC Jazz Fest, is a global competition created to recognize and support top rising jazz band talent, and is designed to help launch and promote the careers of emerging jazz ensembles. This past year’s competition was held at the University of the District of Columbia on June 15, 2017. For more information on DCJazzPrix, please visit https://dcjazzfest.org/dcjazzprix.

Pianist Addison Frei, drummer Matt Young, and bassist Perrin Grace met as students at the prestigious University of North Texas jazz program. Now in their 5th year as a band, AMP Trio, is preparing to release their third full length record, Three, later this spring. AMP Trio brought vocalist Tahira Clayton into the fold with their second album, m(y)our world, In the last year AMP Trio and Tahira Clayton have been heard at the Mid-Atlantic Jazz Festival in Rockville, MD, the Kitchen Café in Dallas, TX, and Kerrytown Concert House in Ann Arbor, MI among others. They have collaborated in New York at venues such as Rockwood Music Hall and the Cell Theatre. AMP Trio has also performed alongside talented artists such as saxophonists Tim Green and Quamon Fowler and trumpeter John Raymond. AMP Trio has recorded together as a rhythm section for albums by Aaron Hedenstrom, Spenser Liszt and Adam Hutcheson. Find out more at www.amptrio.com.

The Ernest Turner Trio has been active on the music scene in Durham, North Carolina.  They have toured nationally and internationally (State Department Rhythm Road 2009 alumni). In addition to his performance schedule he has been very active in Jazz education, doing numerous music clinics/educational performances and serving on the faculty at East Carolina University from 2006-2010. The Ernest Turner Trio has been involved in various musical projects in the North Carolina area, including a recently released live album of trio and quartet music, as well as an upcoming studio album.

‘SULA’ is a NYC-based crossover jazz group, led by drummer Diego Joaquin Ramirez. The group formed in 2016 and has since been refining their sound with performances around New York City, and were finalists of the 2017 DC Jazz Prix Competition. The group’s members hail from Ireland, Israel, Portland, Los Angeles, and Syracuse, and are alumni of Berklee College of Music, The Thelonious Monk Institute, Betty Carter Jazz Ahead Program, The New School, and SUNY Purchase. SULA’s members have performed and recorded with musicians including Taylor Swift, Terri Lyne Carrington, Jimmy Cobb, Vijay Iyer, Mike Stern, Adam Cruz, and Nate Smith.

BMCC Tribeca PAC is Downtown Manhattan’s premier presenter of the arts, reaching audiences from the college community, downtown residential and business communities, local schools, families, and audiences of all ages.   BMCC Tribeca PAC strives to present a broad global perspective through the presentation of high-quality artistic work in music, theatre, dance, film and visual arts. BMCC Tribeca PAC is located on the Borough of Manhattan Community College campus, 199 Chambers Street (between Greenwich Avenue & West Street) and is convenient to the 2/3, A/C/E and R subway lines and the New Jersey Path Train.  For more information please visit our website, www.tribecapac.org.