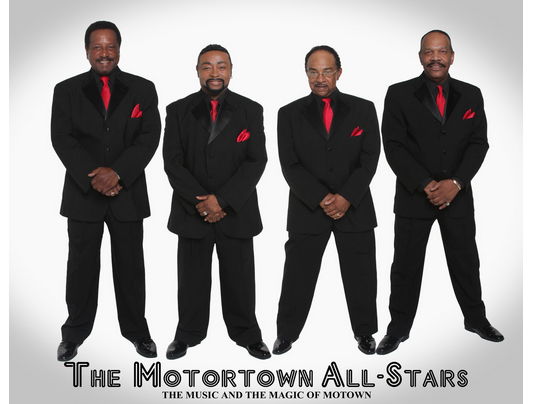 These include family programming, free film retrospectives and a variety of dance, comedy and special events. Purchase tickets online or call 212-220-1460.

Direct from Detroit, world-class vocalists & musicians from the ranks of the Miracles, Temptations & more have joined forces.  The show is jam-packed with impeccable harmonies, dazzling choreography, and those timeless Motown grooves that everyone knows and loves. You can choose to dance, sing along, or just sit back (if you can) and watch the show as they perform all of the greatest hits from the likes of the Four Tops, Temptations, Marvin Gaye and Stevie Wonder. Band members include David Finley (Miracles), George Wilson (Capitols), Douglas Gaddy & Charles Franklin (of Ali Woodson’s Temptations). http://berniestevens.com/61_motortown_all-stars.php

With interests in both theater and music, Spielberg earned a BFA in drama from New York University. As a founding member of the Atlantic Theater Company, she acted in over 60 Off-Broadway plays and radio dramas. Memorable performances include The Soul of Christmas: A Celtic Music Celebration, CBS Saturday Morning, Good Morning Arizona, Life Time Live, and CBS New Orleans. Her music has also been featured on the History Channel and in several documentaries, as well as on “ABC News” and “Lifetime Live” and “The Great American Ballroom Challenge” on PBS. Spielberg has 17 recordings to her credit and appears on over 40 compilations around the world. Robin’s recording “Another Time, Another Place” was named by MainlyPiano.com as one of the best piano releases of 2015.
http://robinspielberg.com/

Akie Bermiss is a pianist, composer, and singer living and working in Brooklyn, NY. He is a graduate of Bard College with degree in music composition. Since graduating from Bard, Akie has made a name for himself with his signature sound – a voice that blends R&B, Jazz, Hip Hop, and Funk effortlessly. He is currently touring with Lake Street Dive, and he has recorded and performed with Aabaraki, the Screaming Headless Torsos, Miri Ben-Ari (the Hip Hop Violinist), Rap sensation Soul Khan, and he also works with his own band, the Akie Bermiss Trio. In addition, he is also the author of a children’s book, “I Hate to Be Sick,” out on Scholastic. https://www.akiebermissmusic.com/

A community chorus, The Brooklyn Women’s Chorus was formed in October 1997 by Park Slope resident and musician, Bev Grant. With a repertoire ranging from South African freedom songs to socially relevant songs by contemporary American songwriters like Garth Brooks, Jackson Browne, Pat Humphries and Bev Grant, song topics range from freedom and justice to peace, resistance and women’s labor history. Their albums include Brooklyn Women’s Chorus and the Power of Song, and I Will Sing, which was recorded live at Tribeca PAC in 2014.  The Brooklyn Women’s Chorus is its own sanctuary for women who are seeking community and a safe place to find and raise their voice in song.
http://www.brooklynwomenschorus.com/

Mentored by Gregory Hines, Andrew Nemr is considered one of the most diverse tap dance artists today. An international performer, choreographer, educator and speaker, Andrew’s work explores tap dance as a vehicle for storytelling and community building. He has played with Grammy Award-winning musicians across multiple genres, founded and directed the tap dance company Cats Paying Dues, and co-founded the Tap Legacy™ Foundation, Inc. (along with Hines). “A masterly tapper” (TheNew York Times). Andrew Nemr’s residency at BMCC Tribeca PAC is part of the CUNY Dance Initiative. http://www.andrewnemr.com/

Scenes Through the Cinema Lens
This free film retrospective focuses on the performing arts and is curated by Krin Gabbard, Professor of Jazz Studies at Columbia University. He is also the author of “Better Git It in Your Soul: An Interpretive Biography of Charles Mingus and Hotter than That: The Trumpet, Jazz, and American Culture.”

From Frankenstein in the 30s to modern horror now, children – not to mention adults  – are still fascinated by the monstrous. We’ll watch footage of vampires, werewolves, giant apes, and creatures from assorted lagoons, but we’ll also take a few moments to contemplate why we are so fascinated by these beasties.

The first jazz recordings were made by The Original Dixieland Jazz Band in 1917. Today we’re much more likely to be celebrating the birthdays of three great jazz artists, Ella Fitzgerald, Dizzy Gillespie, and Thelonious Monk, all of them born in 1917. Happily, there is great film footage for all three, documenting their youthful as well as their mature moments as performers.

Choice moments in cinema history when stars who can act and sing are presented at their most glamorous. We’ll see distinguished jazz singers like Abbey Lincoln, Peggy Lee, and Billie Holiday, all of whom successfully made the transition to cinema. We’ll also watch timeless performances by the best singer/actresses, including Judy Garland, Diana Ross, and Marilyn Monroe.

Filmmakers don’t always get it right when they put jazz into their films, but when they do, we should celebrate. In fact, we should celebrate when all we get is a good opportunity to watch great jazz artists in a bad film. How else can we see them? We’ll see Benny Goodman with his quartet and big band in Hollywood Hotel (1937), Nat King Cole in The Blue Gardenia (1953), Duke Ellington in Murder at the Vanities (1934), and much more.

Monk in Motion: Next Face of Jazz

This year, we will be presenting the top three winners of the Thelonious Monk International Jazz Competition (piano). The winning jazz pianists will perform here at Tribeca PAC, in concert, with his or her own band. Tickets On Sale October 2017.

1st Place Winner – TBD
Saturday, February 10, 2018 at 7:30PM; $30
We will be presenting the 1st Place Winner of the Thelonious Monk International Jazz Competition. The competition takes place in the fall of 2017.

1st Runner-Up – TBD
Saturday, February 24, 2018 at 7:30PM; $30
We will be presenting the 1st Runner Up of the Thelonious Monk International Jazz Competition. The competition takes place in the fall of 2017.

2nd Runner-Up – TBD
Saturday, March 10, 2018 at 7:30PM; $30
We will be presenting the 2nd Runner Up of the Thelonious Monk International Jazz Competition. The competition takes place in the fall of 2017.

The Lost Jazz Shrines Series began in 1998 as part of a national program with 10 presenters from cities across America that have a rich jazz history.  Lost Jazz Shrines celebrates historic New York City jazz venues and virtuosos of a bygone era.  BMCC Tribeca PAC celebrated the “Loft Scene” originally and is the only venue to continue the Lost Jazz Shrines series. Venues have included Café Society, Tin Palace and Minton’s Playhouse to name a few.  Past performers have included NEA Jazz Master Barry Harris, Candido, Luciana Souza and Allan Harris. On May 19,th 2017, Bobby Watson celebrated Art Blakey & The Jazz Messengers with a combo of Jazz Messengers alumni.  In 2018, we will celebrate the legendary jazz venue, Fat Tuesday’s.  Performers TBD.

The Writers in Performance workshop is designed to give writers the opportunity to explore performing their written pieces.  Whether they are playwrights, poets, monologists, writers of prose, or spoken word artist, this workshop gives the writers an opportunity to create a performance piece out of their writings.    Workshop participants are chosen on the strength of their writing plus either performance ability, or willingness to explore that aspect of creativity.  The workshop mixes professionals with students. Each year we include students from BMCC. (Auditions TBA in September 2017. Check our website and social media for updates.)

10Club Tickets On Sale: The regular ticket price for all Tribeca Family events during the 2017/18 season are $30, but 10Club members enjoy 10 tickets for only $12 each. 10Club memberships are on sale now by calling 212-220–1460, online at http://tribecapac.org/family/, or visiting Ticketing Services in person, located in the lobby of the Borough of Manhattan Community College, 199 Chambers Street, New York, NY.  You may also log on to www.tribecapac.org  for single tickets.

Some of the Family events are also available during the week for teachers and their classes. Go to www.tribecapac.org/school-time  for more information if you are a teacher.

Velveteen Rabbit, Reborn
Saturday, November 18, 2017 at 1:30PM; $30
A young boy’s love and a little nursery magic help transform the Velveteen Rabbit from a favorite plaything into a real rabbit. The Boy and Velveteen embark on exciting imaginary adventures, from deep dark caves to the wide open sea, and together they learn the true meaning of friendship in this musical re-telling of one of America’s favorite storybooks. Pushcart Players of New Jersey.  Ages 3-11.

Biscuit, The Little Yellow Puppy
Saturday, December 9, 2017 at 1:30PM; $30
Little Girl is thrilled when she receives Biscuit as a birthday present, but will this rambunctious puppy learn how to behave and accept being part of a family? ArtsPower’s popular musical features a frolicking little puppy who loves exploring, making new friends, and even stirring up some mischief. With over 17 million books in print, Biscuit is a modern classic! Based on the “Biscuit” series of books. Written by Alyssa Satin Capucilli and Illustrated by Pat Schories.  Ages 3-7.

Go, Dog. Go!
Saturday, February 17, 2018 at 1:30PM; $30
Go, Dog. Go!  brings the adventures of P.D. Eastman’s book to life in a frolicking musical dog party. The cast of this beloved preschool favorite has gone to the dogs—with cars, hats, audience participation, and even a wild game of ball as this hilarious visual spectacle manages to sneak in some important lessons about life between innings. Go, Dog. Go! is a musical romp full of surprises, color, clowning, vaudeville, singing/barking, and of course, six lovable dogs! Produced by Childsplay from Tempe, Arizona. Ages 3-7.

Are You My Mother?
Sunday, April 8, 2018 at 1:30PM; $30
At long last, Baby Bird emerges from her shell and expects to be greeted by her mother’s song. But her mother is not there. Where is she? Why isn’t she home? With the help of Dog, Cat, and Hen, Baby Bird sets out in search of Mother Bird in this colorful musical adventure based on P.D. Eastman’s whimsical and well-loved picture book.  ArtsPower National Touring Theater. Ages 4–7.

The Gruffalo: Live On Stage
Sunday, May 20, 2018 at 1:30PM; $30
Join Mouse on a daring adventure through the deep, dark wood in Tall Stories’ magical, musical adaptation of the classic picture book by Julia Donaldson and Axel Scheffler. Searching for hazelnuts, Mouse meets the cunning Fox, the eccentric old Owl and the party mad Snake. Will the story of the terrifying Gruffalo save Mouse from ending up as dinner for these hungry woodland creatures? After all, there’s no such thing as a Gruffalo – is there? Songs, laughs and scary fun for children aged 3 and up and their grown-ups, in the much-loved show that’s toured Britain and the world! Tall Stories of London. Ages 3-10.

BMCC Tribeca PAC is Downtown Manhattan’s premier presenter of the arts, reaching audiences from the college community, downtown residential and business communities, local schools, families, and audiences of all ages.   BMCC Tribeca PAC strives to present a broad global perspective through the presentation of high-quality artistic work in music, theatre, dance, film and visual arts. BMCC Tribeca PAC is located on the Borough of Manhattan Community College campus, 199 Chambers Street (between Greenwich Avenue & West Street) and is convenient to the 2/3, A/C/E and R/W subway lines and the New Jersey Path Train.  For more information please visit our website, www.tribecapac.org.