MIXCLA’s performance is the second concert in BMCC TPAC’s 2019-2020 series, Jazz in Progress: The Next Faces of Jazz, a partnership between BMCC TPAC and the DC Jazz Festival. The series features rising jazz stars who are winners and finalists from the DC Jazz Festival’s DCJazzPrix emerging band competition. 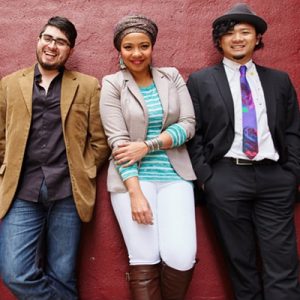 MIXCLA celebrates musical traditions from the mountains of Chile, Japan and Cuba, to achieve a truly unique Afro-Cuban Jazz experience.

All the band members are graduates of the Berklee College of Music, and have performed internationally in events including the Montreal Jazz Festival 2015, the 59th Monterey Jazz Festival and the Wolf Ferrari Haus in Ottobrunn, Germany.

MIXCLA also won the Downbeat Magazine Latin Group Outstanding Performance award in 2017,  and was nominated for the Boston Music Awards’ International Artist of the Year in 2018.

Zahili Gonzalez Zamora (piano, vocals) was born in Cuba, graduated from the National Conservatory of Music in Havana and migrated to Canada in 2002 as a keyboardist with the all-female band D’talle. After a six-year performance stint in Asia, Zahili was awarded a scholarship to attend Berklee College of Music, where she performed and collaborated with Ingrid Jensen, Ruben Rada, Jon Secada, Paquito D’ Rivera, and Emmanuel Jal, among others. She has also performed at the John F. Kennedy Center, Dizzy’s Club Coca Cola, the Montreal International Jazz Festival and the 59th Monterey Jazz Festival.

Gerson Lazo Quiroga (bass) was born in Concepcion, Chile. At the age of five he began learning to play the guitar from his father; later switching to electric bass, which became his lifelong instrument. In 2014, Gerson was awarded the Presidential Scholarship to Berklee College of Music where he currently studies jazz composition, performance and contemporary writing and production. Gerson has performed and shared the stage with Michelle Coltrane, She Welsh, Quintino Cinalli, Jaime Murrell and MIXCLA, with which he played the Montreal International Jazz Festival, and the 59th Monterey Jazz Festival.

Takafumi Nikaido (percussion) was born in Sapporo, Japan. He started playing the saxophone at age six, but after seeing a live performance by Earth Wind & Fire, switched to instruments of a more percussive nature. This led to studies under Fujio Saito, traveling at age 12 to Cuba for private percussion classes and eventually performing with the famous rumba group, Los Muñequitos de Matanzas. In 2014, he received the Best Foreign Entrant Award at the Fiesta del Tambor Percussion Competition. He has studied with prominent percussionists and performed with Jon Secada, FANTINE, Sivamani, Ruben Rada and Totó la Momposina. As a featured member of MIXCLA, he’s also performed at the Montreal International Jazz Festival, and the 59th Monterey Jazz Festival.

Paul Sanchez (trumpet) is from Quito, Ecuador, and studied as a child at the National Conservatory. At the Universidad San Francisco de Quito, he played with well-known jazz musicians Brad Goode, Jeff Galindo, Elizabeth Dotson, Greg Badolato, Rick Peckham and Antonio Hart. In 2009, Paul earned a full scholarship at the University of North Texas, where he took lessons from Rodney Booth, Mike Steinel and Lynn Seton and won first place in their annual competition. Together with the Emisarios Del Jazz quartet, Paul attended the Jamey Aebersold Summer Jazz Workshops and performed at the Kennedy Center in Washington D.C. In March 2011, he was awarded a Presidential Scholarship from Berklee College of Music, where he has shared the stage with Antonio Sanchez, Terence Blanchard, Los Hermanos Arango, Luis Enrique, and Alejandro Sanz, with whom he performed at the Latin Grammys in 2014.