BMCC TPAC Behind the Scenes During The Tribeca Film Festival 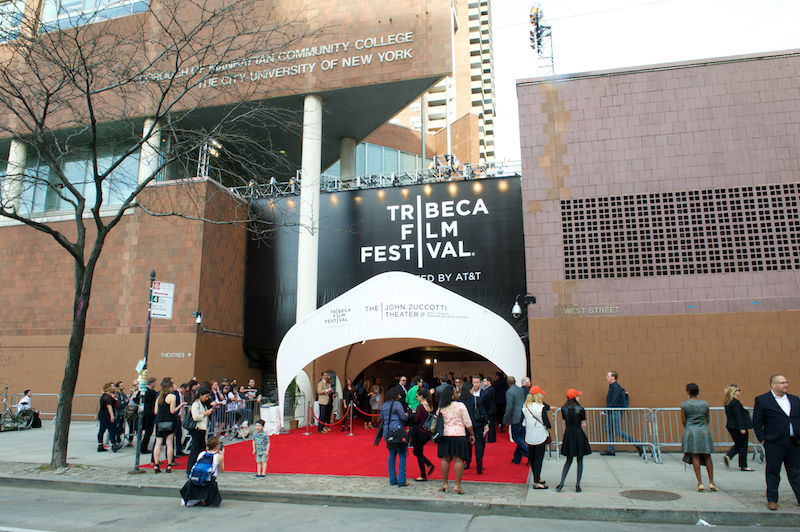 The John Zuccotti Theater at BMCC (Theater One) was calm the afternoon of April 15. But in less than two hours, actor-comedian Chris Rock took the stage with director JJ Abrams­—“Star Wars: The Force Awakens”—where Abrams made headlines as he offered hints about the next Star Wars production. 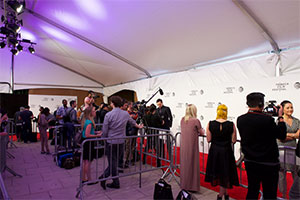 The Tribeca Talks Q&A was one of 20 scheduled events set to happen at the Tribeca Performing Arts Center at Borough of Manhattan Community College (BMCC/CUNY), all part of the 15th Annual Tribeca Film Festival running from April 13-24.

“This is my eleventh year as technical director for the facility during the festival,” said Mark Goodloe, Technical Director at the Tribeca Performing Arts Center. Goodloe and other BMCC staff work closely with production management company Good Sense and Company to make the event run smooth. Workers from the International Alliance of Theatrical Stage Employees Local One (Local One), handle most of the sound, lighting, and rigging. The Projectionist Union (Local 306) handles all of the projection work.

It takes around six weeks of planning and preparation to get TPAC ready for the festival according to Chris De Luca, Good Sense & Company production manager.

“We call all the vendors, make sure the red carpet is ready. A lot of moving parts have to be organized,” said De Luca.

The story behind the red carpet

A few days before the paparazzi, directors and movie stars arrive, designers from Flemington’s Department Store transform the BMCC courtyard into a large semi-circular red carpet covered by specially designed white tents from another company, Parties to Go or PTG.

Steel crowd control barriers square off the holding areas for the press, called the press pen. One spot is for paparazzi, another for print and also T.V. and video.

Rubenstein Communications, the PR firm that does the event’s press places signs on the barriers alerting celebrities what reporter or outlet is in that particular holding area.

Theater preparation includes a visit from a specialized Dolby Digital technician who gives the theater’s existing surround sound system its annual tune up. On Theater One’s stage, Local One workers hoist up even more speakers including large woofers, subwoofers and bass. 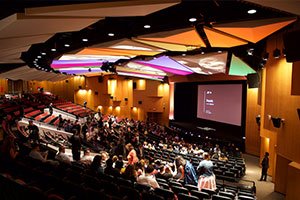 In front of the speakers, they install a large film screen.

“That screen has millions of microscopic holes that allows sound from the speakers to pass through to the audience,” said Goodloe.

On the other side of the Theater sits the projection booth where two enormous Barco projectors take up most of the space. There is also playback equipment, a lighting console and a Dolby sound processor.

“The director steps on stage, introduces his film, says, ‘Enjoy the show,’ then the projectionist and the Dolby technician spring into action,” said Goodloe.

Now we’re in the digital age of film, so there is a secured code that unlocks the film out of the deck on a computer. The studio codes a particular film so it can only be shown a select number of time or even justthat one time, said Goodloe.

Security is also an issue for celebrities themselves, Goodloe says. Earlier that day, he had done a walkthrough of TPAC with Oprah Winfrey’s personal security detail.

“They come to BMCC and check out the red carpet. They look to see if there’s a private entrance to the green room and they meet with BMCC’s security director,” said Goodloe who adds there are three levels of security at the festival.

Davis said it has been a thrill for both him and his staff to be a part of the festival for 15 years. The festival’s audience is eager and there is no doubting they want to be there, Davis said. He adds that it’s unique for a community college to play host to such a thriving high-profile artistic event.

“This an exciting time for the audience, to see all these new-up-and-coming directors and actors, this is exciting for BMCC, this is what New York City is about!”