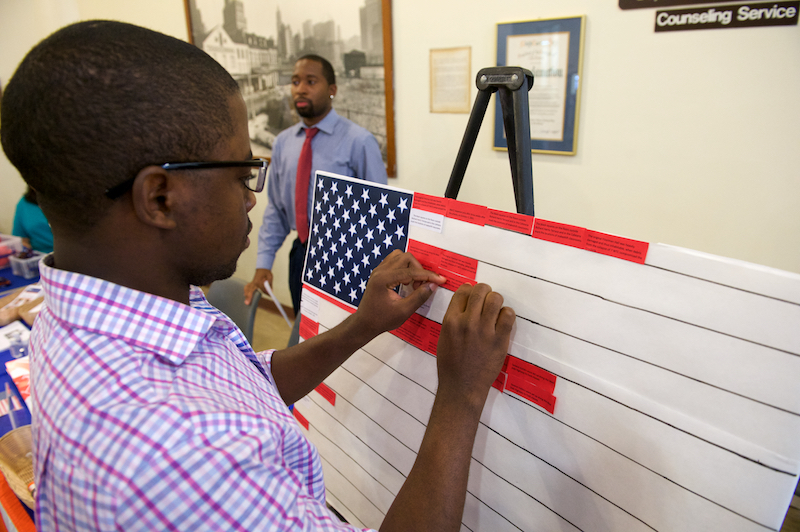 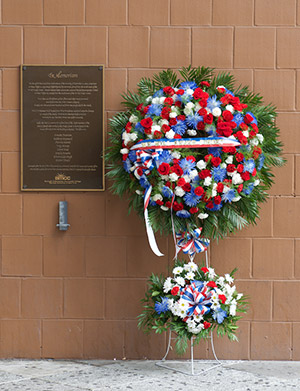 Like any other day, the hallways at 199 Chambers Street were filled with students rushing to class, chatting with friends or making plans for the weekend.

But it wasn’t just any other day. This was September 11, 2015, just 14 years after the worst terrorist attack ever on American soil. And it happened just steps from BMCC. Eight BMCC students were killed in the attacks that day and a part of BMCC’s Fiterman Hall, was destroyed.

The Office of Student Affairs offered students an opportunity to learn about the historic events of 9/11 and how BMCC was affected.

“We’re having a giveaway, students answer true or false questions about how BMCC was directly impacted by 9/11,” said Brown.

Communications major Jessica Gomez explained that she was just nine years old and in the fourth grade at her Brooklyn elementary school on 9/11.

“All the students, we were sitting in a circle on a rug, a teacher was reading us a story,” Gomez said.

Gomez remembers the moment she realized that something unusual was going on. One of her teachers was married to a man who worked in the Twin Towers and was upset. School closed early.

When she got home and turned on the TV, there was a constant barrage of footage showing the towers falling, as well as other news related to 9/11.

“Being a child, I just wanted to watch cartoons,” she said.

In NYC and across the world, everyone felt attacked

BMCC student Charlie Krimon had just started middle school in Brooklyn when the planes hit the building. Krimon and his classmates were outside participating in a fire drill when it happened.

“I could see the World Trade Center burning,” he said.

Krimon and his classmates didn’t know what happened until they got back inside the school building.

BMCC liberal arts major Sayaka Tamura was a teenager, living in Japan on 9/11.That day, Tamura and her family spent hours in front of the TV watching the events unfold.

“I couldn’t believe it. It was like a movie. My friends and family were upset too. We couldn’t begin to comprehend what the Americans must have felt that day,” said Tamura.

Liberal arts major Jeff Norkunas was living in Arizona on 9/11. He was pursuing an opportunity that would grow his glassmaker business.

“I woke up that morning wondering what I was going to do for my birthday,” he said.

Norkunas walked into his living room, turned on the television and because of a three-hour time difference, watched the tragedy unfold before his eyes.

“Most of my clients were in New York City. My business was devastated. I went from being a one-hundred-thousand-dollar-a-year business to nothing,” said Norkunas.

In 2011 he moved to New York City. He recently decided to enroll at BMCC. Later he plans to pursue nuclear science at a four-year institution.

Writing and literature major Juliana Mederios was 19 years old and living with her Mom in Las Vegas on 9/11 2001.

“My Mom woke me up to watch the news, it was so surreal,” said Mederios.

For her, events like the BMCC memorial observance serve an important purpose.

“Being at this school, it makes 9/11 more of a connection to me personally. I’ve learned a lot through the school about what happened here, “ she said, pointing to the different events and reading material in the library.

“Events like today’s, they help keep the memory of all those people we lost alive,” she said.