BMCC Student Entrepreneurs Visit Ghana: Looking Back, to See Ahead 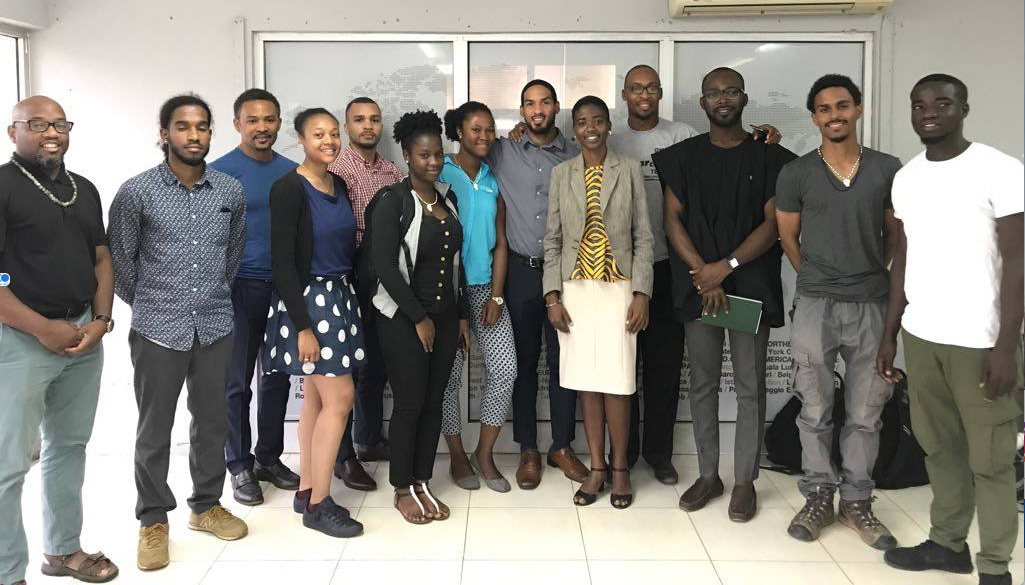 Birthright AFRICA /BMI Scholars with Entrepreneurs at ImpactHub Accra that shared their stories and career paths in innovation in Ghana.

Before leaving for Ghana, the students met with entrepreneurs who are part of the African diaspora in New York, and visited cultural sites in both New York and Washington, D.C.

In the Ghanaian cities of Accra and Kumasi, they met with business leaders and innovators, as well as visiting university campuses and other sites.

“The Birthright AFRICA Scholars were transformed as they explored their cultural roots and legacy of innovation in New York and Washington D.C., and experienced the culminating 10-day, life-changing trip to Ghana,” said Birthright AFRICA Founder Elsheikh.

Overall, the students “gained an in-depth knowledge of historic figures and present-day leaders and entrepreneurs of African descent that have paved the path for them to fulfill their aspirations,” she adds. “To see them experience a country on the African continent for the first time and be affirmed in their resilience and brilliance as people of African descent was a major highlight. They fully embraced the people and culture of Ghana with plans to stay connected and revisit, which is truly inspiring.”

In New York, the students visited the Schomburg Center for Research in Black Culture, the Weeksville Heritage Center, the African Burial Ground and National Monument, The Africa Center, Apt Deco, WeWork Harlem, The Brooklyn Commons and The National Black Theatre.

In Washington D.C., they toured the Smithsonian National Museum of African American History and Culture, the Martin Luther King, Jr. Memorial and Innovation Partners such as The Human Diagnosis Project. They visited the African American Studies department at Howard University, kicking off a series of campus tours that would continue in Ghana, where they also met with business leaders at the African Center for Economic Transformation (ACET), Ostec and Airtel Ghana, as well as meeting with entrepreneurs at Impact Hub Accra.

“Know your history, to know where you are going”

The experience of being in two cities in Ghana — Accra and Kumasi — “opened the students’ eyes to the possibility of who they could be in the world,” says Birthright AFRICA Founder Elsheikh.

CUNY BMI Associate Director Best describes the benefit of the trip by referencing the Sankofa principle that Birthright AFRICA is based on: “Know your history to know where you are going.”

Birthright AFRICA, he says, “not only held trainings for six weeks straight, they gave the students MetroCards and fed them. Walla connected us with thought leaders in New York who are Senegalese, Nigerian, Ghanaian and also African Americans, the entire diaspora. We would meet and have conversations, and then the students would map out their own plans for innovation.”

For BMCC Business major Tredesha Howard, a highlight of the trip was meeting Lucy Quist, an international business leader and CEO of Airtel Ghana, which provides telecommunications services to 15 African countries.

“She was a strong, fearless and bold black woman who was extremely graceful and humble,” Howard says. “Her knowledge and experience were truly an encouragement; despite what stands before you, push through.”

Another impactful segment of the trip was visiting one of the Slave Castles along the Ghanaian Cape Coast, fortresses that held an estimated six million enslaved Africans before they were shipped to other countries.

Physically being in the site “was extremely heavy for me and probably the hardest part of my trip,” Howard says. “Learning the truth about what my people went through in slavery was emotional and at times very tough to digest. However, I have an indescribable gratitude for my ancestors who survived the unspeakable.”

The Ghanaian cities of Accra and Kumasi feel similar to the neighborhoods in Barbados, where she grew up, Howard realized. In Ghana, she says, “There was always this sense of community. Though many people are on the streets selling the same things, there are no traffic lights and very little police presence; everyone for the most part is respectful and peaceful. I would even say they live harmoniously. Yes, Ghana has its issues but it is far from the picture that has been painted about it. I barely even saw one mosquito in my 10 days there. Just like in America there are good parts as well as bad parts.”

An eye-opening introduction to the African diaspora

Kasson Colon-Mangin, a Liberal Arts major at BMCC, was impressed by the group’s visits to Asheshi University and the University of Ghana in Accra, as well as to Kwame Nkrumah University of Science and Technology (KNUST) in Kumasi.

“We also visited several corporations, organizations and black-owned businesses, where we were able to connect with leaders from the African diaspora,” he says.

That concept of an African diaspora was an important thread connecting the students’ meetings with entrepreneurs in both New York and Ghana.

For example, says CUNY BMI Associate Director Best, “We met a Jamaican gentlemen working out of Impact Hub Accra,” which provides assistance to innovators as they develop and deliver a viable product. “In our tour of the space, we met leaders and entrepreneurs within Impact Hub who were from around the world, showing there are more than Ghanaian people in Ghana. That was eye-opening for our students.”

To process the impact of those experiences, each student on the trip to Ghana completed an assignment, describing the innovators and projects they found most inspiring.

“My research topic is focused on visual communications, such as the Adinkra symbols that people in West Africa used to communicate, and on the first topographical map of the world, which was created in Africa,” says Colon-Mangin, who is also investigating “origin stories of the cosmos, Afrikan fighting sciences, proverbs and art.”

One individual who stood out for him on the trip was Dr. Obadele Kambon from the University of Ghana.

“He was able to explain the Bakongo cosmograms and the Adinkra symbols,” says Colon-Mangin. “He also showed the connection between the origins of the universe and the fighting style Capoeira. I was able to receive a one-on-one training session in the Capoeira fighting science of which he is a master. He gave a lecture comparing the Eurocentric teachings we have been mis-educated with, to what our African ancestors created — clearly showing how the ideas were stolen.”

Helping students build their own legacy, and academic success

Looking back on the trip to Ghana, Birthright AFRICA Founder Elsheikh describes it as being “full of affirming, life-changing moments,” for both students and staff.

As Tredesha Howard puts it, the experience “has reaffirmed my staying on track with my goals for the future, because in order to bring about change, you must be in a position to make or influence change. Thus, the only way I can do that is to get my degrees.”

“Students felt energized, inspired to be creators of their own legacy in their own field,” he says. “The trip inspired the students to achieve and bring back to the BMI community that keen sense of belonging that keeps them connected to each other, to Africa and to BMI — and in the long run, that sense of belonging is a significant factor in building retention in college.”