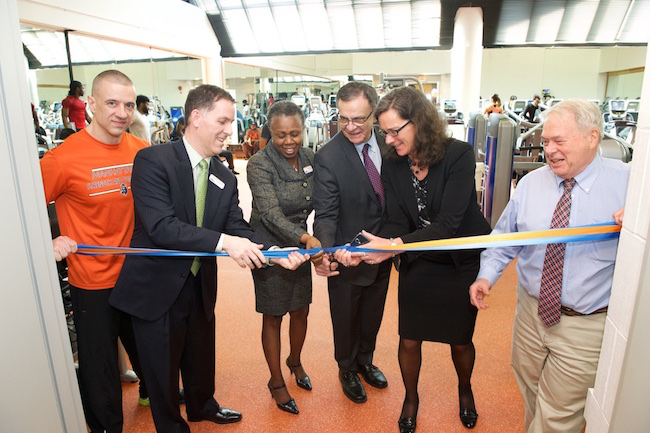 A large crowd of Borough of Manhattan Community College (BMCC/CUNY) students, faculty and staff gathered at the new BMCC Fitness Center to cut a ribbon and officially open the state-of-the-art facility on Wednesday, March 16. Vice President of Student Affairs Marva Craig summed up the facility’s mission by saying, “This is about body and mind, health and wellness.”

BMCC President Antonio Pérez led by example, telling the audience he works out on a regular basis, spending up to an hour each day on a stationary bike.

“Working out helps people live healthier and longer lives. I think it’s important for our students to get used to working out on a regular basis, so they will continue to do so later in life,” said the President.

Computer Science major Majmudjon Mardonv said he uses the BMCC Fitness Center after his classes. “Working out impacts the way I study. I’m more alert and I sleep better,” said Mardonv as he completed a set on the delt/pec fly machine.

The new facility had been in the planning stages according to BMCC Athletic Director Stephen Kelly. “Now we have two rooms now, more space for students, faculty and staff and all the equipment is user-friendly, even for beginners.”

Computer Lab Technician Jocelyn Samuel had been using the fitness center when it was located in the college’s gym for years. “When I heard about all the new machines we would have, I was thrilled,” she said. “It energizes me for the rest of the afternoon.”

According to Business Administration major Victor Williams, students shouldn’t be shy about starting a workout routine. “Just get in here and do what you know you need to do.”

As Liberal Arts major Samantha Rios completed a session on the treadmill she said that exercise is a form of relaxation for the brain. “A stress reliever,” added Nursing major Shaunna Anderson who was on the machine next to her. Then Rios said, “ I know a lot of people who have gaps in their class schedule, why not use that time to work out?”