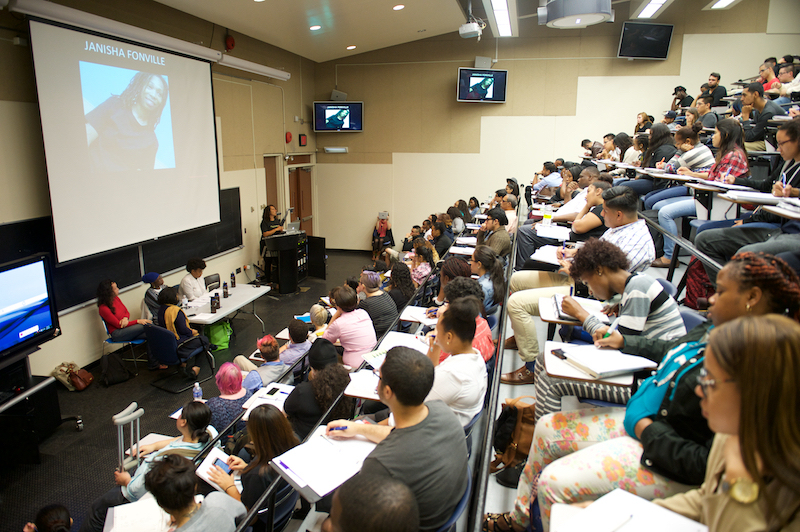 The two-and-a-half-hour panel discussion centered on a growing movement to expand the debate surrounding police brutality and reform beyond just race and class, to include women and LGBTQ communities of color.

“This was a powerful panel for our students, as it highlighted largely invisible forms of physical and emotional abuse against women of color and against gender non-conforming individuals throughout the criminal justice continuum,” said Yolanda Martin, Assistant Professor and Program Coordinator, Criminal Justice at BMCC.

BMCC alumna Estephania Espinal, who is now majoring in criminology at John Jay College of Criminal Justice, said she found the discussion touching and eye opening.

“The one thing that stuck with me is how important our voice is and also how it’s important to make a difference in society,” said Espinal, who plans to earn a master’s degree in forensic psychology and become an FBI detective.

BMCC Criminal Justice major Michael McConnell said he and other students were filled with emotion when panelist Stefanie Rivera told the story of a transgender woman who was allegedly sexually abused by police officers during a routine arrest.

“I feel like something needs to be done, transgender people shouldn’t have to walk around feeling like they are not wanted on this earth,” said McConnell.

McConnell is in his last semester at BMCC and will transfer to John Jay College next year. He plans on becoming a police officer.

He said events like the Gender & Policing panel educate students in topics that aren’t widely covered by mainstream media.

“The more society speaks out, the more chance we have at being heard by lawmakers who can make the change happen,” said McConnell.