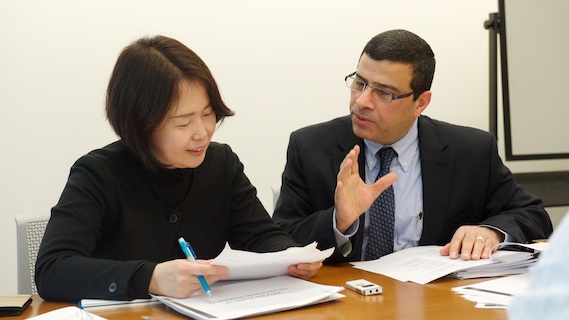 When Chika Arita arrived in New York from Tokyo recently, among the top items on her agenda was a meeting with Professor Achraf Seyman of BMCC’s Accounting Department.

Arita is a section chief in the Administrative Evaluation Bureau of Japan’s Ministry of Internal Affairs and Communications, with responsibility for auditing the performance of government entities in terms of efficiency, effectiveness and transparency. “Our role is similar to that of the General Accounting Office in the U.S,” she explains.

Proficiency in auditing: What it takes

Arita traveled to the U.S. to gain insights into how government auditors are trained in this country—“the competencies they’re expected to acquire, and the way colleges and universities develop and implement appropriate training methodologies,” she says.

Her visit, which was sponsored by a U.S. Department of State leadership program, involved a busy schedule of meetings with auditing professionals in academia, government, and business.

In meeting with Seyam, Arita sought to tap the knowledge and perspectives of a highly accomplished professional. In addition to his academic background, Seyam has nearly two decades’ experience in auditing and accounting for companies, government agencies and not-for-profit organizations. He met with Arita at the college on February 19.

“In order to do performance auditing for the government, you actually need more knowledge and experience, and a broader skill-set than you would as a private sector auditor,” Seyam noted.

“What are the key attributes an auditor needs to have?” Arita asked.

“Good communication skills are the most important,” Seyam said. “You also need an understanding of IT, good decision-making skills, professional judgment, superior critical thinking skills, and an ability—and willingness—to learn and teach as part of the audit process.”

Arita, who is fluent in English and earned a Bachelor’s degree in French language and literature, followed up with a question about communications skills: Why are they especially important?

“Because once you’ve completed an audit, you’ll need to write a report in which you convey your findings clearly and understandably,” Seyam noted. Another aspect of communication skills is a facility for speaking with people at every level of the organization.

“Auditors collect information in a number of ways—through interviews, observation, and analysis of data,” Seyam said. “You need to be able to interact with everyone—department heads, HR, CFOs, CEOs, controllers—in order to get the information you need.” He also addressed some of the differences in the how auditors ply their trade in different countries.

In the U.S., he said, “auditors tend to have more freedom and flexibility in applying their professional judgment than they would in other countries.”