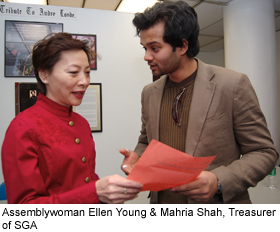 Ellen Young, a single mother, who represents the 22nd Assembly District in Queens spoke to a packed audience of BMCC students on leadership. Young is the first Asian-American woman ever elected to the New York State Legislature. The talk was in celebration of Asian Heritage Month and was co-sponsored by the Student Government Association and professors Zargoza and Rajkumar.

Assemblywoman Young, an immigrant from Taiwan who came to the U.S. with limited resources, has become a successful businesswoman and advocate for the Asian community. She co-founded the Chinese-American Women’s Association and was named as the first female Asian Auxiliary Police Officer in Queens.

The rather newly minted Assemblywoman candidly remarked “as a young single mother in the United States I began my life here receiving $36.86 in food stamps.” In a touching but confident manner Ms. Young spoke about herself in Taiwan as a “shy girl who couldn’t look anyone in the face. “ I would never have thought I’d ever land up in Albany” she remarked. And just as amazing, according to Young, was the hard work of her campaign manager, her 26 year-old daughter.

Young said she was an avid reader as a girl and a rather lonely one who blossomed by college when she participated in the debate team where she almost flopped but had the courage to finish her talk on the subject, “the pen is mightier than the sword.” Nevertheless, she added, “I’m still shy.”

Ms. Young spoke about her political awakening when as a battered wife she started to advocate for women’s issues and then ran for the local school board as a single parent. Her next l step was working for the election of John Lui, Council Member and Chairperson of the Council’s Transportation Committee. Young felt so strongly about the need for Asian representation that she sold her house and moved into Liu’s district to support his candidacy. Young says the first person she spoke to after the 22nd Assembly District was vacant was Councilman Liu, who graciously wished her success in her campaign. Now, that she has passed her 100th day in office, Young is pleased about some major legislative successes that she participated in.

A major victory was her effort to rescind most of the $8 million dollar cut in Medicaid. She is also responsible for the passage of a bill that “puts sexual offenders behind bars.” Young is also committed to improving the quality of life and education for her constituents by working to secure more after-school programs, decreasing classroom size, hiring better teachers, improving access to health care and providing more affordable housing.

Ms. Young said, she no longer has much time to socialize because “my constituents come first, the underrepresented.”