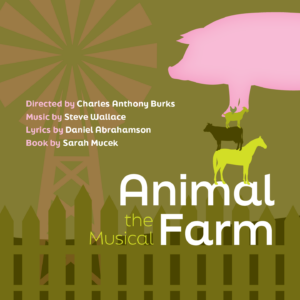 The Borough of Manhattan Community College (BMCC/CUNY) Theatre program  presents “Animal Farm: The Musical”, directed by Theatre Professor and program Chair Charles Anthony Burks, through November 20 at various times in Theatre 2 at 199 Chambers Street. Admission is free and open to the general public.

In the original BMCC musical, the classic George Orwell story “Animal Farm” is told through song by a group of farm animals who rebel against their human farmer, hoping to create a society where the animals can be equal, free and happy.

“BMCC’s Theatre program has been given the privilege and entrusted to bring to life the first development production of this new musical with our students,” said Burks. “Our cast and crew of students reflect a diverse and inclusive group of people that belong to various cultures, LGBTQ+ typical and neurodivergent communities.”

“Being able to introduce BMCC students not just to the text, but to experience Animal Farm as these characters in a musical, we think is really powerful,”  said Wallace and Mucek. “BMCC is a community college, but the level of professionalism that we’re expecting from the students during this production is the same as it would be in a professional realm.”

More than 40 students and six faculty have worked on the production, from performance to set design and construction.

As “Animal Farm: The Musical” progresses, the temptations of power soon erode the utopian animal society and a pig named Napoleon soon emerges as a charismatic but corrupt leader who uses disinformation, propaganda and the purging of political enemies to establish an ironclad hold on the farm and change the guiding credo from “all animals are equal” to “all animals are equal, but some animals are more equal than others.” Along the way, familiar characters are animated on stage including the demagogic Napoleon, the propagandist Squealer, the sage Old Major, and the workhorse Boxer.

Theatre major Celia Lorraine Fernandez, who grew up in the Bronx, is assistant director on the production and says the experience has been life changing.

“Professor Burkes has given me the opportunity to have a hand in directing a few scenes,  Fernandez said. “I was able to watch a production come to life from a table read to stage cue to cue.”

Fernandez says audiences will be spellbound by the powerful musical score of the show. But she adds the timeliness of Orwell’s writing is evident in today’s politics.

“The political climate that we are currently how power can be a very dangerous tool,” said Fernandez.

Upon graduating BMCC, Fernandez plans to continue her education in Theatre and pursue writing, producing and directing.

Theatre major Kamille Welch, who was born and raised in Brooklyn, plays the character Clover, a cart horse who is an older mare with instincts to protect and take care of all the other animals.

“She’s also very loyal and hardworking,” said Welch. “To prepare for playing Clover, I read ‘Animal Farm’ and then watched the animated adaptation film. Both the book and the movie gave me a better idea of how to portray her character. I also did some research and watched many videos on horse behavior.”

“Playing an animal is not easy,” said Welch. “At first it felt a little silly an oftentimes difficult, but we’ve managed to come together and make the farm come to life.”

Welch, who attended a performing arts high school and has a history studying theater, said there was so much she’d learned during her time, so far, at BMCC. “I’ve learned to take different approaches and to make stronger choices while performing as an actor. Many of the professors in the Theatre program are incredibly dedicated to creating a safe space for the actors so that they can be comfortable, and I feel that makes it easier for everyone to really let go of fear and use that adrenaline to drive their performance.”

After graduating BMCC, Welch plans to continue studying theater and earn a bachelors of Fine Arts.

For dates and times of Animal Farm, visit the show’s web page.

The creation and production of a live theatre production presents opportunities for students to gain professional experience, supporting the BMCC Strategic Plan including Strategic Goal 3: Integrate Career Development Throughout the Student Experience