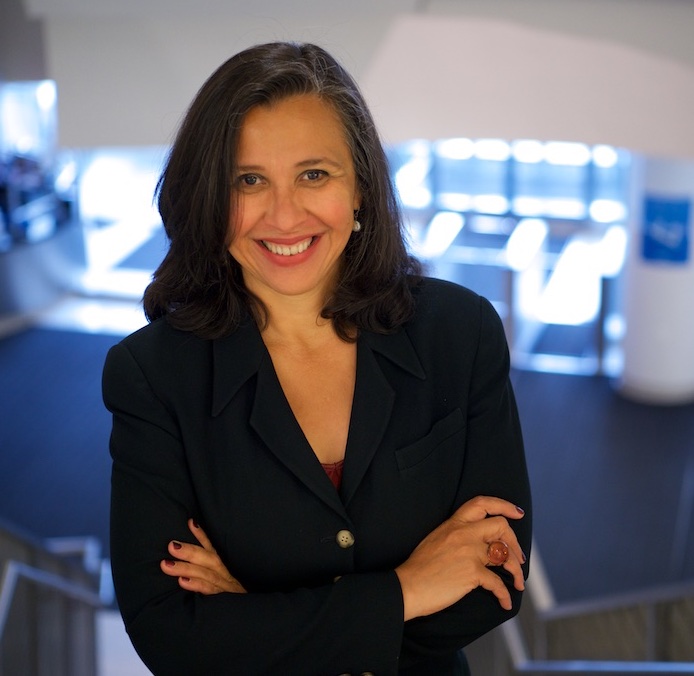 Sophie Maríñez is a Professor of Modern Languages and Literatures at the Borough of Manhattan Community College and a Professor of French and Francophone Studies in the Ph.D. Program in French at The Graduate Center (CUNY).

She is also a 2021 BMCC Distinguished Teaching Award recipient, a Mellon/ACLS Fellow, a CUNY William P. Kelly Research Fellow, and a former Faculty Fellow at the Center for Place, Culture, and Politics of the Graduate Center, CUNY. At BMCC, she has served as a Faculty Leadership Fellow and as the advisor of the major in Modern Languages.

Her current research, on Caribbean comparative cultural studies, focuses on the literatures of the Francophone Caribbean and the Dominican Republic. In Fall 2021, she was a Scholar-in-Residence at El Instituto: Institute of Latina/o, Caribbean, and Latin American Studies, The University of Connecticut (Storrs), where she continued working on her second book, Spirals in the Caribbean: Representing Violence in Haiti and the Dominican Republic.

Professor Maríñez is twice an awardee (2012 and 2022) of the National Endowment for the Humanities, and has received awards from the Women Studies Certificate Program at the Graduate Center and the Société des Professeurs Français et Francophones d’Amérique. In June 2020, the Modern Languages Association’s Executive Council appointed her to serve in its Committee on Community Colleges (2020-2023).

As of 2022, she is also the Series Editor of the Caribbean Series at Brill, a long-standing academic press in Europe.

Since her appointment at BMCC in 2012, Professor Maríñez has served as the French-Speaking World Club advisor, founded the literary magazine Échos du Tout-Monde,and led a study abroad program to France. As the advisor of the major in Modern Languages, she initiated the tradition of sending students with almost-full scholarships to Middlebury College language summer immersion programs. She has also mentored former students pursuing graduate degrees in French, Law, English, Creative Writing, and Bilingual Education, who were later on accepted at Miami University, Brooklyn Law School, Columbia’s Teachers College, Temple University, UPenn, Rutgers, Northwestern, and NYU, among other institutions.

Certified as a Writing-Across-the-Curriculum and Honors instructor, Professor Maríñez has taught all levels of French language and literatures, including, most recently, courses focusing on the Francophone World, non-fiction creative writing in French, and French Caribbean Literature in Translation (Honors).

Professor Maríñez also teaches graduate courses on the literatures of Haiti, the Dominican Republic, and their respective diasporas in the M.A. in The Study of the Americas program at the Division of Interdisciplinary Studies of City College, which offers tracks in Human Rights and Dominican Studies. Prior to her position at CUNY, she held a two-year visiting faculty position in French at Vassar College. An immigrant from French and Dominican background, and fully trilingual in French, Spanish, and English, she also speaks Portuguese and has worked as an actress, a professional translator, and a journalist. From 1997 to 2000, she was a diplomat, working as a Cultural Counselor at the embassy of the Dominican Republic in Mexico. A mother of two, she and her children are proud CUNY alumni.

Series Editor of the Caribbean Series at Brill.

My current research project, funded by a Mellon/ACLS Fellowship is an interdisciplinary monograph on the representation of violence in literature, political discourse, and cultural productions from Haiti and the Dominican Republic.

Check out this PODCAST a conversation with Matthew Boyd about Haitian-Dominican relations on Ask A Professor, Podbean.com, May 2019.

Watch HERE, this keynote talk for the conference on Art and Literature in Contemporary Dominican Republic, Haiti, and their Diasporas, given at the Center for the Humanities, The Graduate Center, March 15, 2018.

Review of Anne Eller, We Dream Together: Dominican Independence, Haiti, and the Fight for Caribbean Freedom. H-Haiti, H-Net Reviews. September, 2018.

“Nuevas posibilidades,” an essay on the dynamics between Haiti and the Dominican Republic. ViceVersa Magazine, October 23, 2017.