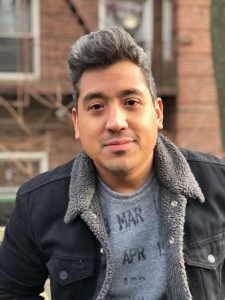 Francisco Delgado is an Indigenous (Chamorro/Tonawanda Band of Seneca) writer who lives with his wife and their son in Queens, New York.

His literary scholarship has been featured, or is forthcoming, in Studies in the Novel, Teaching English in the Two-Year College, Transmotion, and Memory Studies. And his creative work has appeared in JMWW, Newtown Literary, Queensbound, and Lost Balloon.

His chapbook, Adolescence, Secondhand, was published by Honeysuckle Press in 2018.

In his capacity as a board member of the Northeast Modern Language Association (NeMLA), he advocates for the needs and interests of contingent faculty, adjuncts, independent scholars, and/or faculty at two-year institutions.

My current literary research examines the effects of U.S. military service on Native/Indigenous communities. Among my central questions with this project are: how can works of literature help us understand the phenomenon of high military service among Indigenous people? How has this impacted personal and communal relations? What other forms of community does military service make possible?

I am also studying the Onöndowa’ga:’ Gawë:no׳ (or Seneca language), which is my traditional language through my akso:d (maternal grandmother), who was adopted out of her community at a young age.

In Spring 2022, I created ENG 329: Native American/Indigenous Literatures, which is the only course in the BMCC Catalog devoted to Indigenous literatures of Native North America and the Pacific.