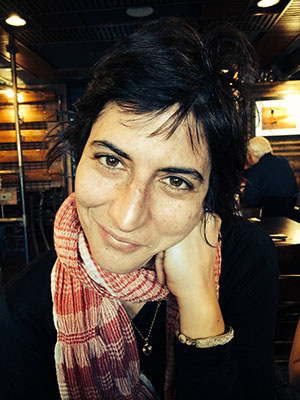 Ferdman (she/her) was born and raised in Puerto Rico to Argentinian parents and now calls Brooklyn home. She is professor of Theatre at Borough of Manhattan Community College, CUNY and is consortium faculty member of the Theatre Program at The Graduate Center.

Her research interests are in contemporary performance and curating practices, in particular immersive, participatory, site based performance, and urban dramaturgies. She is interested in live art practices that engage spectators in challenging preconceived notions of what theatre is and can be, as well as in interdisciplinary performance historiographies.
Her book, Off Sites: Contemporary Performance beyond Site-Specific (SIU Press, 2018), won the honorable mention for ATHE’s best book award. Off Sites rethinks current definitions of site-specific performance, a genre of theatre that adopts spaces outside of traditional theatre buildings and uses the experience of space, place, and situation as an integral component to the structure and content of a theatrical work. Contextualizing site-specific practices in both visual and performing arts discourses, the book traces the evolution of the term from an experimental staging practice to an engaged situational event.

She has held numerous fellowships to support her research, among them: ASTR Research Fellowship Award; CUNY Collaborative Research Opportunity Grant; BMCC Faculty Fellowship; PSC-CUNY grants; CUNY Writing Fellowship; The Mellon School of Performance Research at Harvard University led by Martin Puchner; The Center for Place, Culture, and Politics at The Graduate Center led by David Harvey; a Magnet Fellowship, as well as a Chateaubriand Fellowship.

Before coming to BMCC, she curated many international events and exchanges at the Martin E. Segal Theatre Center including two Site-Specific Performance Symposia with Frank Hentschker and Gulgun Kayim; the U.S. premiere of Rodrigo Garcia Accidens; Staging Presence with Marianne Weems and Nick Kaye; and Urban Performance with Maud Le Floch and the late Neil Smith. She was a co-curator of mars2bklyn, a performance and arts exchange platform between Marseille and Brooklyn. For over six years, she was Artistic co-Director of Ex.Pgirl, a physical theatre company with whom she created Ablution, Waving Hello, 10 Plates, and Paris Syndrome, commissioned by HERE Arts Center. Ex.Pgirl won the Franklin Furnace award, were two-time HERE artists in residence, and received grants from NYSCA, DCA, and LMCC, among others.

3 CRS.3 HRS.
SPE 100
SPE 100 (Fundamentals of Public Speaking)
The aim of this course is to develop effective skills in speech communication. The student examines how to generate topics and organized ideas, masters elements of audience psychology and practices techniques of speech presentation in a public forum. All elements of speech production and presentation are considered.
3 CRS.3 HRS.
THE 100
THE 100 (Introduction to Theatre)
The collaborative nature of the theatrical event will be explored in readings, presentations, play attendance, papers and creative projects. Contributions of the playwright, actor, director, designer, architect, critic, producer and audience will be investigated through selected periods, genres, theatre spaces and styles of production. The student's potential roles and responsibilities in creating theatre will be emphasized.
3 CRS.3 HRS.
THE 324
THE 324 (Latin American Theatre and Performance (Same as LAT 124))
This survey course will look at major trends and directions in Latin American theatre by drawing on plays and performance ensembles of the mid-twentieth century to the present. We will look at the work of some of the most influential playwrights, directors, and ensembles as they grapple with their political, national, and cultural contexts, and discuss these artists? dual commitment to social conscience and artistic expression. We will read manifestoes and plays by many of Latin America?s major playwrights and performing artists, as well as critical writing by scholars and historians. We will also engage with documentary films and videos of performances.
Prerequisite: SPE 100 or THE 100 or LAT 100
3 CRS.3 HRS.
THE 300
THE 300 (History of Theatre)
A survey of theatre of the world from its ritual origins to Jacobean England. Major periods explored through reading and viewing significant plays, studying the sociological forces that led to different theatrical forms, theatre architecture, methods of production, playwrights and the relevance of these plays and theatrical forms today.
Prerequisite: THE 100 and ENG 201 or ENG 121